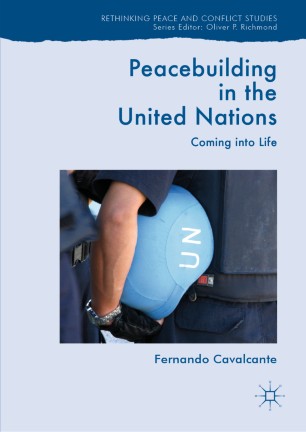 Peacebuilding in the United Nations

This book traces the trajectory and different meanings of the concept of peacebuilding in the United Nations since the early 1990s. It analyses how that concept gained life in a particular context and the implications of this process for the Organisation’s support to societies affected by armed conflict in general and for peace operations in particular. Departing from tenets about the influence of ideas in world politics and engaging with the critique of the liberal peace scholarship, the book provides a theoretically informed narrative of how peacebuilding acquired different meanings while remaining largely motivated, justified, legitimated and informed by a proactive and top-down agenda of promoting liberal democratic institutions, norms and values as a remedy to the challenges faced by societies affected by armed conflict. The book will appeal to scholars, policymakers and practitioners in peacebuilding and post-conflict development.
Fernando Cavalcante is Political Affairs Officer at the United Nations, currently serving in Afghanistan. Dr. Cavalcante’s research in peace and conflict studies focuses on political, policy and institutional aspects relating to UN peace operations.