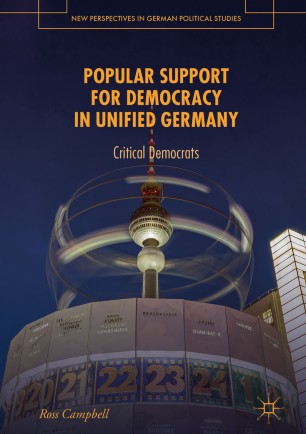 This book examines attitudes towards democracy in the Federal Republic of Germany. By drawing on extensive survey evidence, it charts Germans’ changing views of the political system prior to and following unification. The study examines four aspects of the political system: how it functions overall, attitudes towards the Basic Law, trust in representative institutions, and views of the European Union. Rather than accepting or rejecting democracy, the research shows how Germans merge shades of criticism and support. In addition, it pinpoints the factors that condition support, showing how it is influenced by durable and changeable stimuli. Overall, the findings challenge suggestions of a crisis of democracy but they also demonstrate that support is particularly low towards aspects of the European Union. This book appeals to readers interested in public opinion and democracy in Germany, along with those interested in the changing relationship between citizens and the state.

Ross Campbell is Senior Lecturer in Political Science at the University of the West of Scotland, Paisley, UK. His research focuses on the politics of the Federal Republic of Germany and he has published widely on attitudes towards democracy, electoral behaviour and political participation. His recent articles have appeared in the European Journal of Political Research, International Political Science Review, German Politics and Contemporary Politics. He is a member of the editorial board for the Journal for Contemporary European Studies.