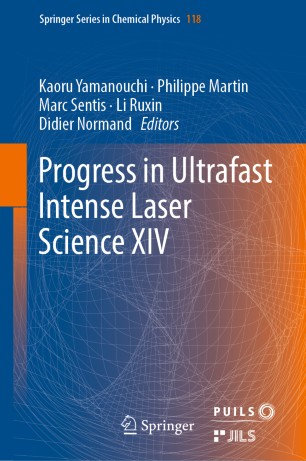 This 14th volume in the PUILS series presents up-to-date reviews of advances in Ultrafast Intense Laser Science, an interdisciplinary research field spanning atomic and molecular physics, molecular science, and optical science, which has been stimulated by the rapid developments in ultrafast laser technologies. Each chapter begins with an overview of the topics to be discussed, so that researchers unfamiliar to the subfield, as well as graduate students, can grasp the importance and appeal of the respective subject matter; this is followed by reports on cutting-edge discoveries. This volume covers a broad range of topics from this interdisciplinary field, e.g. atoms and molecules interacting in intense laser fields, laser-induced filamentation, high-order harmonics generation, and high-intensity lasers and their applications.

Kaoru Yamanouchi has been Professor of Chemistry at The University of Tokyo since April 1997. His research fields are in physical chemistry and AMO physics, especially gas phase laser spectroscopy, chemical reaction dynamics, and intense laser science. In 1996, he launched a new research project to investigate how atoms, molecules, and clusters behave in an intense laser field whose magnitude is as large as that of a Coulomb field within atoms and molecules. By developing new experimental techniques such as mass-resolved momentum imaging, pulsed gas electron diffraction, and coincidence momentum imaging, he has continued a successful exploration of the new research field of ultrafast intense laser science. Among his discoveries, ultrafast structural deformation of molecules and ultrafast hydrogen atom migration within hydrocarbon molecules are particularly noteworthy. He has also demonstrated that the ultrafast structural changes of molecules can in principle be probed in real time with femtosecond temporal resolution using a method called laser-assisted electron diffraction.

Philippe Martin is the Laser Interactions and Dynamics Laboratory Director of CEA-Saclay since 2013. His background relies on the interaction between strong laser fields and matter. He started with theoretical studies on laser assisted collisions in presence of strong electromagnetic fields. After a post-doctoral position at the "Université Libre de Bruxelles", he obtained a permanent position at CEA-Saclay where he developed a new thematic involving condensed matter systems. In the 2000's, by improving for the first time the temporal contrast of strong laser pulses thanks to a so-called “Double Plasma-Mirror,” he has with his group demonstrated that with this "pulse cleaning method", it is now possible, using ultra-short pulses (a few ten’s of fs), to reach electromagnetic energy fluxes of 1019 W/cm2 on intact solid-density targets. On such a short time scale, plasma ions hardly move during the interaction, whereas the electronic density is driven to complex high frequency dynamics. The “frozen” character of such dense plasmas gives rise to a new interaction regime, the so-called Relativistic optics where the coherence of the collective response is preserved, leading to spectacular applications as very intense high-order harmonics sources and particle acceleration.

Marc L. Sentis received his Engineer Diploma in Energetics from the Ecole Nationale Superieure des Arts et Metiers, Paris, in 1980. He then received his PhD and “Doctorat d'Etat” diplomas in applied physics from Aix-Marseille University in 1982 and 1988, respectively. Since 1983, he has been a staff member at the CNRS (Centre National de la Recherche Scientifique) at the Institute of Fluid Mechanics of Marseille until 1994 and at the Institute of Research on non-Equilibrium Phenomena. In 2000, he created the Laboratory of Lasers, Plasmas and Photonic Processing (LP3 CNRS – Aix-Marseille University). In 2010, he launched a new ultrafast laser infrastructure ASUR (Applications of ultrafast laser). His current areas of interest and research include ultrafast laser physic, laser – matter interaction in fs, ps, and ns regimes and laser plasma X-ray sources. Since 2014, he is also a special advisor of CNRS for High Intensity lasers, Large Laser Infrastructures and European ELI project.

Ruxin Li has been the director of the Shanghai Institute of Optics and Fine Mechanics (SIOM) of the Chinese Academy of Sciences since 2009. He has a strong background in ultrafast intense laser science, contributing significantly in the development of petawatt (PW) level ultraintense ultrafast lasers, laser wakefield acceleration of electrons, high order harmonic generation in atoms and molecules, and femtosecond laser filamentation nonlinear optics. Li led his team to consistently excel in high peak power laser development. Meanwhile, they apply the PW level laser pulses to the acceleration of electrons reaching the GeV level using a novel technique of two-stage laser wake-field acceleration. Ruxin Li received his Ph.D. from SIOM in 1995. He served as the vice director of SIOM from 2001 to 2009.

Didier Normand is presently an emeritus research director at CEA, in charge of the large national and international laser programs. He has been doctor in Physics at the French Atomic Energy Commission since 1974. He is an expert in strong laser field physics, multiphoton processes of atoms and molecules, above threshold ionization, multi-electron dissociation of molecules, cluster Coulomb explosion. In 1998 he became director of the Photons, Atoms and Molecules (SPAM) laboratory. From 2005 to 2013, he was the Head of the Matter and Radiation Interaction Institute (IRAMIS) which involved about 450 researchers in laser science, nanosciences and mesoscopic physics. Since 2004, he is the chairman of LASERLAB-EUROPE access board which monitors the opening of the state-of-the-art intense laser infractructures in 16 European countries.