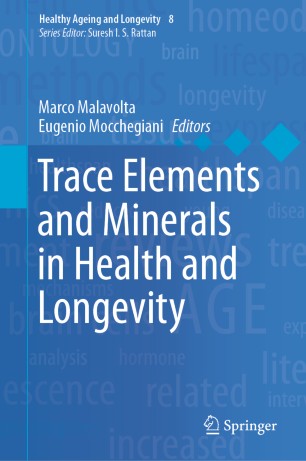 Trace Elements and Minerals in Health and Longevity

This book describes the role of trace elements in health and longevity, pursuing a biogerontological approach. It offers essential information on the impact of trace elements on molecular and physiological processes of aging, and on their impact on health in connection with aging. The major topics covered in its 11 chapters, each dedicated to a specific trace element or mineral, are:

a) Role of the element in species longevity,

b) Recommended intake for longevity in animal species and in the elderly,

d) Excess/toxicity and age-related disease, and

e) Interactions with drugs prescribed in the elderly.

Clinical, animal and other laboratory models of interest in aging are included, which enable a more in-depth analysis to be made. The respective chapters are a mixture of overviews and more in-depth reviews in which the mechanisms of aging are described from the point of view of their specific interactions with trace elements and minerals

Marco Malavolta began his career as a chemist with a PhD in Nutrition and Health at the University of Ancona, but then increasingly shifted his focus to gerontology research. He has been working in this field for the past 15 years, with a particular focus on the role of trace elements in aging. Currently, he is involved in the identification of changes in the elderly’s nutritional parameters (including those in circulating trace elements) which might be the consequence of intrinsic changes occurring in the cells of the body that are believed to be associated with the phenomenon of cellular senescence. He is the author or co-author of over 130 peer-reviewed articles in the field of nutrition and gerontology and is a member of the editorial board of several journals dedicated to these thematic areas. Most of his research has been conducted as a contract researcher for scientific management of extramural projects at the Advanced Technology Center for Aging Research at INRCA IRCCS, the Italian National Institute of Health and Science on Aging, a leading public institute that is dedicated to developing translational research in the biomedical and health service area, and to delivering highly specialised medical, nursing and long-term care for older citizens.

Eugenio Mocchegiani has 40 years of expertise as a researcher at INRCA IRCCS (the Italian National Institute of Health and Science on Aging). A former Head of the Centre of Nutrition and Aging at INRCA, he has now retired but remains active in the field, contributing his expertise on the diffusion of scientific knowledge. His major expertise concerns the role of endocrine and nutritional factors in immunosenescence, tumours, infectious diseases, metabolic diseases and dementia. He has particularly made contributions on zinc binding proteins as genetic and biological markers of aging. He has received several grants from the Italian Ministry of Health for studies concerning micronutrients and aging, and was the coordinator of the EU Project ZINCAGE in the FP6 program. In addition, he participated in other EU funded projects such as IMAGINE and MARKAGE. He is the author or co-author of more than 200 peer-reviewed articles in the field of nutrition and gerontology and is a member of the editorial board of several journals dedicated to these thematic areas.