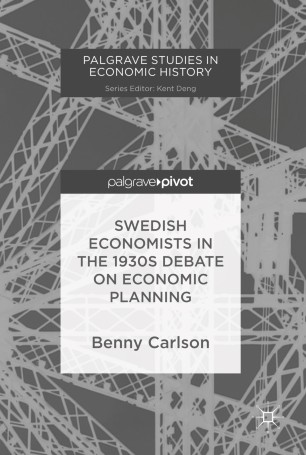 Swedish Economists in the 1930s Debate on Economic Planning

The 1930s, characterised by repercussions from World War I and the Great Depression, was an era of populism, nationalism, protectionism, government intervention and attempts to create planned economies. The perceived need for economic planning emerged in Sweden in part due to the increasing political strength of the Social Democrats and their evolution from a party hampered by Marxist fatalism to a pragmatic mass movement. The Swedish debate continued beyond World War II and is still relevant to today’s economic crises, which have resulted in a demand for action coming from below (populism) and above (elitism).

Carlson surveys the arguments for and against economic planning as they were put forward by leading Swedish economists in the 1930s, with a focus on the thoughts of Gustav Cassel, Eli Heckscher, Gösta Bagge, Gunnar Myrdal and Bertil Ohlin, among others. In so doing he provides a timely exploration of the debate on the necessary and desirable extent of state intervention in market economies.

Benny Carlson is Professor Emeritus at the Department of Economic History, Lund University School of Economics and Management, Sweden. Carlson first completed a degree in journalism and worked for 10 years at a local newspaper before studying economics. He has authored 20 books and over 100 minor publications and articles in Swedish and international scholarly journals.