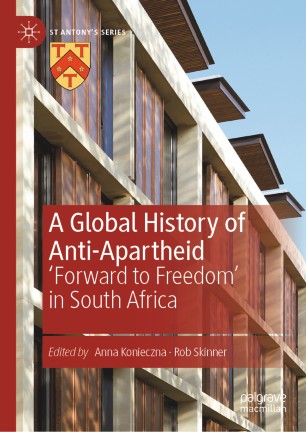 A Global History of Anti-Apartheid

'Forward to Freedom' in South Africa

This book explores the global history of anti-apartheid and international solidarity with southern African freedom struggles from the 1960s. It examines the institutions, campaigns and ideological frameworks that defined the globalization of anti-apartheid, the ways in which the concept of solidarity was mediated by individuals, organizations and states, and considers the multiplicity of actors and interactions involved in generating and sustaining anti-apartheid around the world. It includes detailed accounts of key case studies from Europe and Asia, and Latin America, which illustrate the complex relationships between local and global agendas and political cultures embodied in anti-apartheid. Taken together, these examples reveal the tensions and synergies, transnational webs and local contingencies that helped to create the sense of ‘being global’ felt by anti-apartheid campaigners around the world.

Anna Konieczna is a teaching fellow at Sciences Po, France. Her research focuses on the history of international relations in Africa and the French foreign policy in Southern Africa.

Rob Skinner is a Lecturer in Modern History at the University of Bristol, UK. His published works include The Foundations of Anti-Apartheid (2010) and Modern South Africa in World History (2017).