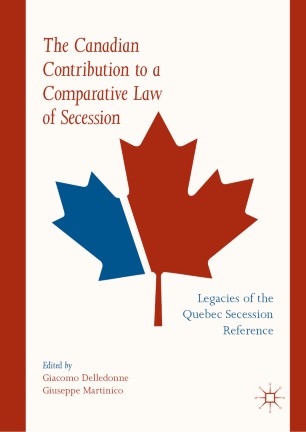 The Canadian Contribution to a Comparative Law of Secession

Legacies of the Quebec Secession Reference

This edited collection gathers together Canadian and non-Canadian scholars to reflect on and celebrate the 20th
anniversary of the Quebec Secession Reference, delivered by the Canadian Supreme Court in 1998. It opens with
two Canadian scholars exchanging thoughts on the legacy of the reference from a domestic perspective as one of
the most questioned decisions of the Canadian Supreme Court. To follow, non-Canadian scholars discuss the
impact of this reference abroad, reflecting upon its influence in European and non-European contexts (Spain,
Scotland, the EU after Brexit, Eastern European Countries, Ethiopia, and Asia). Two final chapters, one by a lawyer
and one by a political scientist, explore the democratic theory behind that reference.

“This valuable contribution by Giacomo Delledonne and Giuseppe Martinico convincingly demonstrates that the legacies of the Reference reverberate across the globe.” (Yonatan T. Fessha, International Journal of Constitutional Law, Vol. 18, 2020)
“This book offers a thorough and kaleidoscopic perspective on the major legal and political issues regarding secession in contemporary academic discussion. The essays compiled in this book can be seen as a state-of-the-art summary of the current debate on the problem of secession and as an excellent primer for those interested in studying this fascinating and puzzling issue.” (João Diogo, Regional & Federal Studies, August 07, 2019)
Buy options