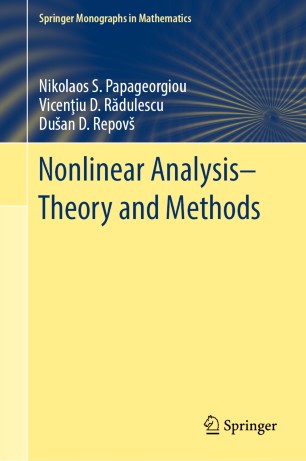 This book emphasizes those basic abstract methods and theories that are useful in the study of nonlinear boundary value problems. The content is developed over six chapters, providing a thorough introduction to the techniques used in the variational and topological analysis of nonlinear boundary value problems described by stationary differential operators. The authors give a systematic treatment of the basic mathematical theory and constructive methods for these classes of nonlinear equations as well as their applications to various processes arising in the applied sciences. They show how these diverse topics are connected to other important parts of mathematics, including topology, functional analysis, mathematical physics, and potential theory. Throughout the book a nice balance is maintained between rigorous mathematics and physical applications. The primary readership includes graduate students and researchers in pure and applied nonlinear analysis.

Nikolaos S. Papageorgiou graduated from the Massachusetts Institute of Technology and received his PhD in Applied Mathematics from Harvard University. He is Professor at the National Technical University of Athens, Greece. He has written more than 800 research papers and ten books.

Vicenţiu  Rǎdulescu received his PhD and Habilitation from the University of Paris 6 under the supervision of Haim Brezis. He is Senior Researcher at the Institute of Mathematics, Physics and Mechanics in Ljubljana, Professor at the AGH University of Science and Technology in Krakow, and Professorial Fellow at the Institute of Mathematics of the Romanian Academy. He has written more than 300 research papers and ten books.

Dušan Repovš received his PhD from Florida State University. He is Professor at the University of Ljubljana and Head of the Nonlinear Analysis, Topology, and Geometry Group at the Institute of Mathematics, Physics and Mechanics in Ljubljana. He is the author of more than 400 research papers and 3 books (Kluwer, CRC Press, European Mathematical Society). He is a member of the European Academy of Arts and Sciences.

“This book is a guide to the several important tools which are used to study nonlinear boundary value problems. … This book is a serious and well-written introduction to the subject. … all the important tools for the study of nonlinear PDE are present and explained in sufficient clarity to tackle research-level problems." (Jeff Ibbotson, MAA Reviews, July 28, 2019)
Buy options