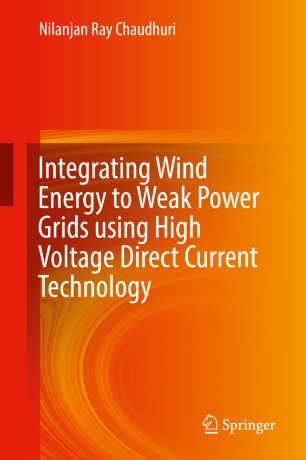 This book is the first of its kind to provide a comprehensive framework for connecting wind farms to weak power grids using High Voltage DC technology. Most onshore wind energy potential is located in areas that are hardly inhabited and the majority of wind energy that is being harnessed by European countries is currently offshore, both sourced from locations that lack the presence of a strong power grid. This book focuses on the many challenges the wind farm industry faces integrating both onshore and offshore wind to ‘weak’ grids using HVDC technology. Through case studies and illustrative examples the author presents a framework for theoretical and mathematical analysis of HVDC technology, its application and successful integration of onshore and offshore wind farms.

Nilanjan Ray Chaudhuri received his Ph.D. degree from Imperial College London, London, UK in 2011 in Power Systems. From 2005-2007, he worked in General Electric (GE) John F. Welch Technology Center. He came back to GE and worked in GE Global Research Center, NY, USA as a Lead Engineer during 2011-2014. Presently, he is an Assistant Professor with the School of Electrical Engineering and Computer Science at Penn State, University Park, PA. He was an Assistant Professor with North Dakota State University, Fargo, ND, USA during 2014-2016. He is a Senior Member of the IEEE and member of IEEE PES. Dr. Ray Chaudhuri is the lead author of the book Multi-terminal Direct Current Grids: Modeling, Analysis, and Control (Wiley/IEEE Press, 2014), and an Associate Editor of the IEEE Transactions on Power Delivery. He has co-authored more than 60 journal and conference papers, and presently holds 9 granted US patents and 6 European patents. Dr. Ray Chaudhuri is the recipient of the National Science Foundation Early Faculty CAREER Award in 2016