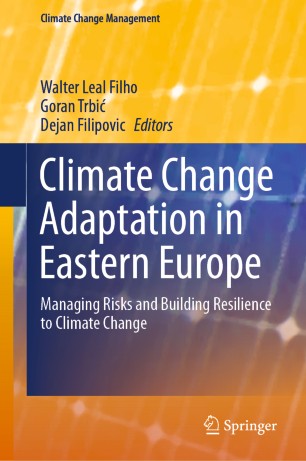 This book focuses on managing risks and building resilience to climate change, showcasing experiences from research, field projects and best practices to foster climate change adaptation in Eastern Europe that can be implemented elsewhere.
Climate change affects countries in Eastern Europe, i.e. the Western Balkans and Southeast Europe in a variety of ways. Apart from severe floods, there are reports of decreasing water reserves in the southern regions, and of gradual changes in biodiversity and agricultural production. In the South Caucasus area, for instance, climate change models project a decline in precipitation and suggest that it will continue to become drier this century.
Many Eastern European countries, especially the non-EU ones, have weak national climate policies, and transboundary collaborations, as well as limited public engagement in matters related to climate change. As a result, climate change poses a serious threat to their economic stability and development and to the sustainable development of the region.
The above state of affairs illustrates the need for a better understanding of how climate change influences Eastern Europe, and for the identification of processes, methods and tools that may help the countries and the communities in the region to adapt. There is also a perceived need to showcase successful examples of how to cope with the social, economic and political problems posed by floods/droughts in the region, especially ways of increasing the resilience of agriculture systems and of communities.
Addressing this need, the book presents papers written by scholars, social practitioners and members of government agencies involved in research and/or climate change projects in Eastern Europe.