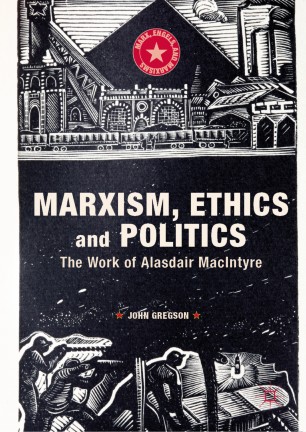 The Work of Alasdair MacIntyre

This book discusses Alasdair MacIntyre’s engagement with Marxism from the early 1950s to the present. It begins with his early writings on Marxism and Christianity, moving through his period in the New Left and the Socialist Labour League and International Socialism in the late 1950s and 1960s. It then discusses MacIntyre’s break with Marxism by developing the brief but telling five-point critique he gives of Marxism in his 1981 volume After Virtue. Marxism, Ethics and Politics highlights MacIntyre’s continuing admiration for much in Marx’s thought, noting that his contemporary project is developed in response to what he now sees as the inadequacies of Marxism, particularly Marxist politics. It concludes by examining the place of Marxism in the contemporary MacIntyrean debate and by pointing out the contested nature of the claims about Marxism that MacIntyre makes.

John Gregson is Senior Lecturer in Criminology at Leeds Beckett University, UK. His research interests include critical criminology and political theory, particularly Marxism and the philosophy of Alasdair MacIntyre.

“In his engaging study of Alasdair MacIntyre’s thought from the 1950s to the present, John Gregson reveals the deep continuities and yet discontinuities between MacIntyre and Marxism. In doing so, he shows MacIntyre to be enduringly Marxist in key respects, yet also one of the most perceptive critics of the Marxist project, at least as it was articulated over the course of the 20th century and within the New Left and other leftist movements. Those wanting a sophisticated analysis of MacIntyre on Marxism will find Gregson’s book an outstanding resource.” (Keith Breen, Senior Lecturer in Political and Social Theory, Queen’s University, Belfast, Ireland)
Buy options