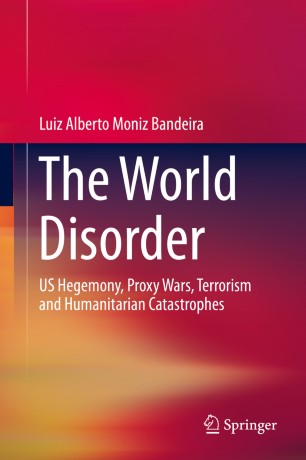 This book offers a historical analysis of the geopolitical and geoeconomic competition between the USA and Russia, which has recently heated up again due to the eastward expansion of NATO. The analysis departs from an exploration of the USA’s foreign policy and geopolitical ambitions by illustrating the influence of Wall Street and the military-industrial complex on the country’s political decision-making.
The historical review covers a wide timespan, from the Second World War and the birth of NATO, to the wars against Iraq and Afghanistan, to the rebellions that erupted in Eurasia, Northern Africa and the Middle East in the 2010’s, as well as the wars in the Ukraine and in Syria. By doing so, it reveals the influence of US neocons, the US intelligence services and the military complex on the Arab Spring, the Color Revolutions and the armed conflicts in Ukraine and Syria. Ultimately, the book depicts a new era of worldwide instability and disorder, dominated by violence and arbitrariness.

Prof. Dr. Luiz Alberto de Vianna Moniz Bandeira, Baron de São Marcos, is graduated in juridical sciences, and also holds a Ph.D. in political science from the University of São Paulo.  He was professor at the Escola de Sociologia e Política de São Paulo. In 1976, he received grants from, among other institutions, the Ford Foundation, to conduct research in Argentina, Uruguay, and Paraguay on Brazil's historical role in the Río de la Plata Basin. From 1977 through 1979, he extended this research project to the United States and Europe, thanks to a post-doctoral fellowship awarded by the Social Science Research Council and the Joint Committee on Latin America Studies of the American Council of Learned Societies in New York. He held the Chair of History of Brazilian Foreign Policy in the Department of History at the University of Brasília. He was awarded the Juca Pato Prize and named as Brazilian Intellectual of 2005 for the book Formação do Império Americano (Da Guerra contra a Espanha à Guerra no Iraque). He was subsequently awarded an honorary doctorate by UniBrasil in Curitiba and by Federal University of Bahia. Bandeira has been invited to lecture in many countries around the world. He was an Under-Secretary in Rio de Janeiro’s State Government, being its representative in the federal capital, Brasília from 1991 through 1994 and a cultural attaché at the Consulate-General of Brazil in Frankfurt am Main from 1996 through 2002.
Luiz Alberto de Vianna Bandeira has been awarded the Cross of Merit by Germany and the Gran-Cross of Baron of Rio Branco, by Brasil.