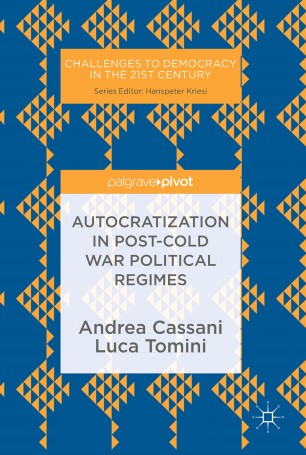 This book deals with post-Cold War processes of autocratization, that is, regime change towards autocracy. While these processes are growing in number and frequency, autocratization remains a relatively understudied phenomenon, especially its most recent manifestations. In this volume, the authors offer one of the first cross-regional comparative analyses of the recent processes of regime change towards autocracy. Building on an original conceptual framework, the two authors engage in the empirical investigation of the spreading of this political syndrome, of the main forms that it takes, and of the modes through which it unfolds in countries ruled by different political regimes, with different histories and belonging to different regional contexts. The research is conducted through a mix of research techniques that include descriptive statistical analysis, Qualitative Comparative Analysis and case study. This book will be of interest to a heterogeneous readership that encompasses the broader community of scholars, analysts, observers, journalists, and practitioners interested in political development and regime change in different geographical areas.
Andrea Cassani is Research Fellow at the Department of Social and Political Sciences of the Università degli Studi di Milano, Italy. His work has been published in journals such as International Political Science Review, Italian Political Science Review, Africa Spectrum, European Journal of Political Research, Contemporary Politics, and European Political Science.
Luca Tomini is Chercheur Qualifié FNRS (Research Associate Professor) at the Centre d’Etude de la Vie Politique of the Université Libre de Bruxelles (ULB), Belgium. His work has been published in journals such as European Journal of Political Research, Europe-Asia Studies, Comparative European Politics, Journal of Contemporary Central and Eastern Europe. He is the author of the book When Democracies Collapse (2017).