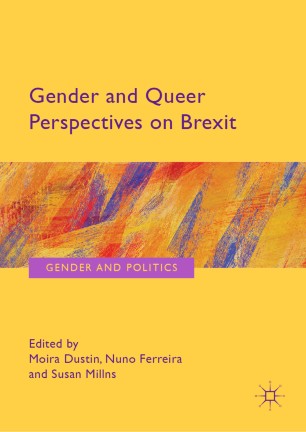 Gender and Queer Perspectives on Brexit

This collection examines the opportunities and challenges, rights and wrongs, and prospects and risks of Brexit from the perspectives of gender and sexuality. While much has been written about Brexit from legal, political, social and economic perspectives, there has been little analysis of the effects of Brexit on women and gender/sexual minorities who have historically been marginalised and whose voices have been less audible in political debates – both nationally and at the European level. The collection explores how Brexit might change the equality, human rights and social justice landscape, but from the viewpoint of women and gender/sexual minorities. The contributions gathered in it demonstrate the variety of ways that Brexit will make a difference to the lives of women and individuals marginalised because of gender or sexual identity.

Moira Dustin is Research Fellow at the University of Sussex, UK. Her research focusses on gender, equality and refugee studies.

Nuno Ferreira is Professor of Law at the University of Sussex, UK. His research focusses on human rights, European law, children's rights and asylum and refugee law.

“Gender and Queer Perspectives on Brexit is a timely contribution to understanding the process and implications of Brexit … . the editors have created an important collection that tells a different story of the possible implications of Brexit. This volume contributes to the burgeoning literature that looks at the gendered process of Brexit and how this is situated within broader political processes in Europe and beyond.” (Toni Haastrup, LSE Review of Books, blogs.lse.ac.uk, October 29, 2019)
Buy options