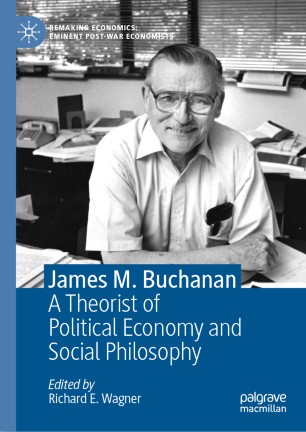 A Theorist of Political Economy and Social Philosophy

“A fine collection of essays exploring, and in many cases extending, Jim Buchanan’s many contributions and insights to economic, political, and social theory.”
– Bruce Caldwell, Professor of Economics, Duke University, USA
"The overwhelming impression the reader gets from this very fine collection is the extraordinary expanse of James Buchanan's work. Everyone interested in economics and related fields can profit mightily from this book."
– Mario Rizzo, Professor of Economics, New York University, USA
This book explores the academic contribution of James Buchanan, who received the Nobel Prize for economics in 1986. Buchanan’s receipt of the Prize is noteworthy because he was a maverick within the economics profession. In contrast to the preponderance of economists, Buchanan made little use of mathematics and no use of econometrics, preferring to used logic and language to insert his ideas into the scholarly community. Moreover, his ideas extended the domain of economic inquiry along many paths that numerous economists subsequently pursued. Buchanan’s scholarship brought economics and political science together under the rubric of public choice. He was also was a prime figure in bringing economic theory into closer contact with moral and social philosophy.
This volume includes essays distributed across the extensive domain of Buchanan’s scholarly contributions, reflecting the range of his scholarly interests. Chapters will examine Buchanan’s scholarly work on public finance, social insurance, public debt, public choice, economic methodology, constitutional political economy, law and economics, and ethics and social theory. The book also examines Buchanan in relation to other prominent economists, both from the distant past and the recent past.

Richard E. Wagner is Holbert L. Harris Professor of Economics at George Mason University, USA. He is Senior Fellow of the Academic Advisory Board at the Independent Institute, the James Madison Institute for Public Policy Studies and the Virginia Institute for Public Policy. He was co-editor of the scholarly journal Constitutional Political Economy from 1989-1997, and he is currently a member of the editorial boards of Constitutional Political Economy, the Journal of Public Finance and Public Choice, and the Review of Austrian Economics. He was one of Buchanan’s dissertation students, a co-author with Buchanan, and a faculty colleague for some 25 years.

“This volume is so broad in scope, so rich in fascinating reflections, so instructive that anybody should benefit from it who has a genuine, if critical, interest in the work of James M. Buchanan. On this basis, it should be a pleasure to enter an informed, open discussion.” (Karen Horn, Constitutional Political Economy, Vol. 31, 2020)