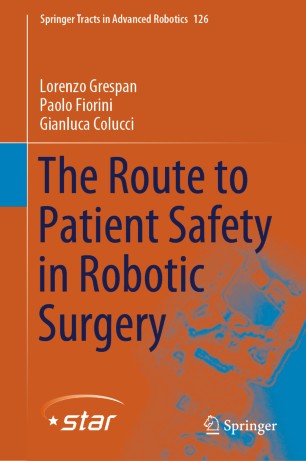 The Route to Patient Safety in Robotic Surgery

The introduction of a new technology in a consolidated field has the potential to disrupt usual practices and create a fertile ground for errors. An example is robotic surgery that is now used in most surgical specialties, pushed by technology developers and enthusiastic surgeons. To analyze the potential impact of robotic surgery on patient safety, a consortium of major European Universities started the project SAFROS whose findings are summarized and further elaborated in the three parts of this book. Part one describes safety in complex systems such as surgery, how this may disrupt the traditional surgical workflow, how safety can be monitored, and the research questions that must be posed. Part two of the book describes the main findings of this research, by identifying the risks of robotic surgery and by describing where its ancillary technologies may fail. This part addresses features and evaluation of anatomic imaging and modeling, actions in the operating room, robot monitoring and control, operator interface, and surgical training. Part three of the book draws the conclusions and offers suggestions on how to limit the risks of medical errors. One possible approach is to use automation to monitor and execute parts of an intervention, thus suggesting that robotics and artificial intelligence will be major elements of the operating room of the future.