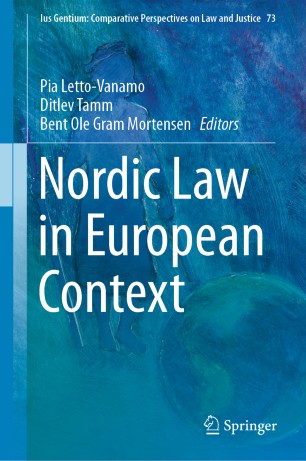 Nordic law is often referred to as something different from other legal systems. At the same time, it is a common belief that the Nordic countries share more or less the same legal tradition and are very similar in their approach to the law. Considering both of these points of view, the book tells a story of how Nordic law and Nordic legal thinking differ from other legal systems, and how there are many particularities in the law of each of the Nordic countries, making them different from each other.
The idea of “Nordic” law also conceals national features. The basic premise of the book is that even if, strictly speaking, there is no such thing as a Nordic common law, it still makes sense to speak of “Nordic” law, and that acquiring a more-than-basic knowledge of this law is interesting not only for comparative lawyers, but also helpful for those working with Nordic lawyers and dealing with questions involving law in the Nordic countries.

Pia Letto-Vanamo is a professor at the University of Helsinki. She is a legal historian and comparative lawyer specialising in European and Nordic legal history, Nordic legal culture(s) and transnational law. Currently she is working as dean of the Faculty of Law  t the University of Helsinki.  She has published several books and articles on European and Nordic legal history, history of legal integration, on legal cultures in the world and on questions concerning access to justice and the ADR.
Ditlev Tamm is a professor of legal history, and teaches history of law, comparative law and law and literature at the University of Copenhagen. He is a member of the Royal Danish Academy of Science and Letters and has published several books and articles within the fields of Danish and European legal history, comparative law, political history, literature and cultural studies.
Bent Ole Gram Mortensen is a professor at the University of Southern Denmark, Odense. His chair includes environmental and energy law. He has published a large number of books and articles on a broad range of subjects, including energy law, environmental law, Arctic law, constitutional law and competition law.