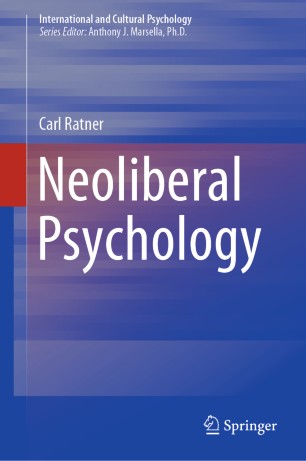 This provocative monograph defines the elusive concept of neoliberal psychology, focusing on its form, content, and cultural contexts and establishing it as a core feature of modern society. Its cross-cultural analysis examines the reality of neoliberal psychology in the globalized world, asserting that neoliberalism influences individuals’ sense of self, identity, and—regardless of country of origin—concept of nationality. Macro cultural psychological theory opens out neoliberal psychology in its most visible aspects, such as work life, sexuality, consumer behavior, and the shared vision of the good life. At the same time, the author identifies profound social inequities and other negative aspects of neoliberal society and discusses how they may be corrected.

Included in the coverage:

Since neoliberalism is the dominant social system in today’s world, and because it commands both strong support and strong criticism from diverse interest groups, Neoliberal Psychology will be of general interest to a wide readership. The book’s psychological focus is a new window into neoliberalism that is more accessible than more technical accounts of its economics and politics, and it should appeal especially to social science students and professors.

Carl Ratner is an international figure in cultural psychology. He has written extensively on the theory and methodology of cultural psychology. His work focuses upon concrete features of culture, especially their political-economic interests and structure. He emphasizes the political nature of psychology that embodies and reproduces culture. He has explained these issues in analyses of varied psychological phenomena including emotions, child development, cognition, perception, sexuality, gender, memory, mental illness and literacy. Ratner has applied cultural psychology to social-political issues of our time. These include multiculturalism, postmodernism, social constructionism, neoliberalism. His work utilizes analyses of culture and psychology to identify more fulfilling cultural organization and psychological activity. In this regard he has written about cooperatives and cooperation as an alternative culture and psychology. Ratner has worked academically for extended periods in China, Saudi Arabia, England, and India.

“Neoliberal Psychology is a book that opens up a number of important questions concerning capitalism in relation to psychological functioning as well as psychology’s disciplinary legitimacy. … it is through their asking that psychologists may begin to better harness the emancipatory capabilities of their discipline, while remaining aware of its fundamental limitations.” (Nick Malherbe, Marx and Philosophy, marxandphilosophy.org.uk, April 01, 2019)