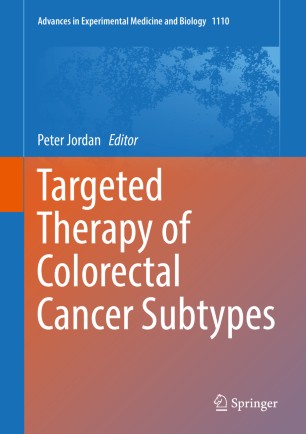 Part of the Advances in Experimental Medicine and Biology book series (AEMB, volume 1110)

In this book, a group of researchers shares their expertise on the identification and characterization of genetic colorectal cancer subtypes. They describe solid pathobiological knowledge on the distinct sporadic tumour subtypes, including the mutations found in oncogenes and tumour suppressor genes, the types of genomic instability encountered, and the cellular signalling pathways activated. The book content indicates opportunities for the development of further pathway-specific therapeutic drugs or drug combinations, allowing to cope with the appearance of resistant tumours.

The nine chapters of this book cover the main aspects underlying colorectal cancer development but also of its therapeutic options, which have been undergoing substantial changes by moving from the use of general cytotoxic agents that affect rapidly growing cells to more tumour-specific drugs. In the first case, all dividing cells in the patient’s body are affected and this causes severe and debilitating side effects. In the second case, the increasing knowledge about the molecular genetics of tumours has led to a new generation of drugs, which specifically interfere with the cell survival pathways that are activated in a given tumour. This allowed to identify groups of patients for targeted therapy that is much better tolerated.

The book is thus an interesting update for health professionals on the current knowledge on heterogeneity in colorectal cancer. In addition, it should inspire the drug-developing scientific community by highlighting potential therapeutic Achilles heels of distinct subtypes of colorectal cancer.