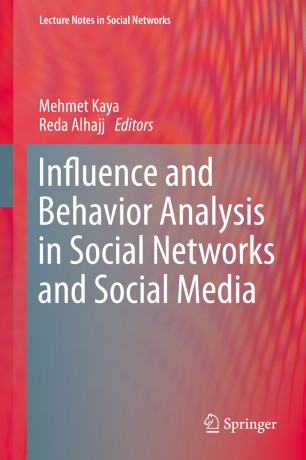 Influence and Behavior Analysis in Social Networks and Social Media

This timely book focuses on influence and behavior analysis in the broader context of social network applications and social media.  Twitter accounts of telecommunications companies are analyzed.  Rumor sources in finite graphs with boundary effects by message-passing algorithms are identified.
The coherent, state-of-the-art collection of chapters was initially selected based on solid reviews from the IEEE/ACM International Conference on Advances in Social Networks, Analysis, and Mining (ASONAM '17). Chapters were then improved and extended substantially, and the final versions were rigorously reviewed and revised to meet the series standards. Original chapters coming from outside of the meeting round out the coverage. The result will appeal to researchers and students working in social network and social media analysis.