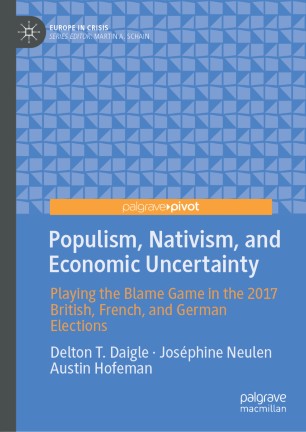 Playing the Blame Game in the 2017 British, French, and German Elections

Part of the Europe in Crisis book series (EIC)

“Daigle’s, Neulen’s, and Hofeman’s comparative analysis of the 2017 elections in Germany, Britain, and France puts populism in a broader perspective. The breadth of their public opinion data and the leverage of their comparative design allows them to scrutinize systematically some popular explanations for the rise of right-wing populism. This could hardly be more timely.”

“This gem of a book is a high-quality investigation into a pressing phenomenon in economically-advanced democracies: the success of the extreme right in France, Great Britain and Germany.”

This project offers an in-depth look at the three 2017 elections held in Western Europe: France, Germany, and the UK. With events like Brexit and a general rise in right-wing populism across highly industrialized nations, understanding the underlying causes of increasingly extreme electoral behavior is both valuable and prescient. A highly theoretically-focused and current project, it provides a consistent methodological and analytic approach that uses election study data and primary sources to offer a complete and cogent picture of this complex phenomenon as can only found by examining the attitudes and behaviors of the most powerful of democratic participants: the voters.