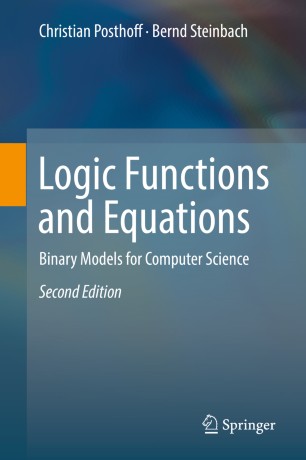 The expanded and updated 2nd edition of this classic text offers the reader a comprehensive introduction to the concepts of logic functions and equations and their applications across computer science. The approach emphasizes a thorough understanding of the fundamental principles as well as numerical and computer-based solution methods.

Updated throughout, some major additions for the 2nd edition include:

- a new chapter on sets, lattices, and classes of logic functions;

- a new chapter about SAT-problems;

- a new chapter about methods to solve extremely complex problems; and

Based on the extensive teaching experience of the authors, Logic Functions and Equations is highly recommended for a one- or two-semester course in computer science and related programs. It provides straightforward high-level access to these methods and enables sophisticated applications, elegantly bridging the gap between mathematics and the theoretical foundations of computer science.

Christian Posthoff studied Mathematics at the University of Leipzig. From 1968 to 1972, he worked as a programmer and in the field of Operations Research; simultaneously, he did his Ph.D. in 1975 with the thesis "Application of Mathematical Methods in Communicative Psychotherapy". In 1972, he began working at the Department of Information Technology at the Chemnitz University of Technology; up to 1983, his research activities concentrated on logic design. Important results have been algorithms and programs for solving Boolean equations with a high number of variables and the Boolean Differential Calculus (a generalized differential and integral calculus for Boolean rings) for the analytical treatment of different problems in the field of logic design. These results have been collected in a monograph "Binary Dynamic Systems", and allowed the habilitation (Dr.-Ing. habil.) at the Faculty of Electrical Engineering in 1979 and the promotion to Associate Professor.In 1983, he was promoted to Full Professor of Computer Science in the Department of Computer Science at the same university, and since 1984, he was Head of the Institute of Theoretical Computer Science and Artificial Intelligence and Research Director of the Department of Computer Science. His research activities included the application of fuzzy logics for the modeling of human-like "thinking" methods, learning from examples, the construction of intelligent tutoring systems, the parallelization of inference mechanisms, systems of diagnosis and configuration. He received the Scientific Award of the Chemnitz University of Technology four times.

In 1994, he moved to the Chair of Computer Science at The University of The West Indies, St. Augustine, Trinidad & Tobago. From 1996 to 2002 he was Head of the Department of Mathematics & Computer Science. He mainly focused on the development of Computer Science education at the undergraduate and graduate levels to attain international standard. Twenty years later it can be said that these intentions were very successfully fulfilled. In 2001, he received the Vice-Chancellor's Award of Excellence.  From 2010 – 2012 he spent two years at St. Georges University in Grenada with the same goals. Since his return to Germany (now retired) he devoted his efforts to the interdisciplinary research and education in several areas (Computer Science – Mathematics – Applications in different fields). He is the author or co-author of more than 20 books and many publications in journals and conference proceedings.

Bernd Steinbach studied Information Technology at the University of Technology in Chemnitz (Germany) and graduated with an M.Sc. in 1973. He graduated with a Ph.D. and with a Dr. sc. techn. (Doctor scientiae technicarum) for his second doctoral thesis from the Faculty of Electrical Engineering of the Chemnitz University of Technology in 1981 and 1984, respectively. In 1991 he obtained the Habilitation (Dr.-Ing. habil.) from the same Faculty. Topics of his theses involved Boolean equations, Boolean differential equations, and their application in the field of circuit design using efficient algorithms and data structures on computers.

From 1992 to 2017 he was a Full Professor of Computer Science / Software Engineering and Programming at the Freiberg University of Mining and Technology, Department of Computer Science. He served as Head of the Department of Computer Science and Vice-Dean of the Faculty of Mathematics and Computer Science. His research areas include logic functions and equations and their application in many fields, such as Artificial Intelligence, UML - based testing of software, UML - based hardware / software co-design, and extremely complex problems. He is the head of a group that developed the XBOOLE software system. He is co-author and editor of 13 books. He published more than 250 chapters in books, complete issues of journals, and papers in journals and proceedings.

He has served as Program Chairman for the IEEE International Symposium on Multiple-Valued Logic (ISMVL), and as guest editor of the Journal of Multiple-Valued Logic and Soft Computing. He is the initiator and general chair of a biennial series of International Workshops on Boolean Problems (IWSBP) which started in 1994, with 12 workshops until now. He received the Barkhausen Award from the University of Technology Dresden in 1983.

“The presented book … represents a unique and very recommendable exposition on the theory of Boolean functions and its numerous applications. The text is very well written in such a style that readers with varying backgrounds will benefit from the presented results, both theoretically and practically. Its particular approach will also give readers already familiar with propositional logic and SAT new and interesting insights.” (Wolfgang Schreiner, Computing Reviews, August 06, 2019)
Buy options