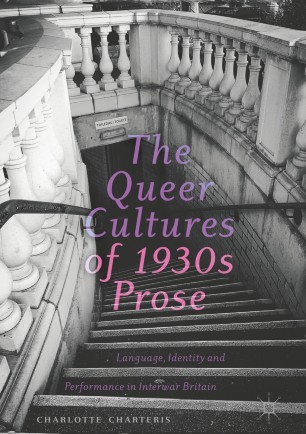 The Queer Cultures of 1930s Prose

Offering a radical reassessment of 1930s British literature, this volume questions the temporal limits of the literary decade, and broadens the scope of queer literary studies to consider literary-historical responses to a variety of behaviours encompassed by the term ‘queer’ in its many senses. Whilst it is informed by the history of sexuality in twentieth-century Europe, it is also profoundly concerned with what Christopher Isherwood termed ‘the market value of the Odd.’ Drawing, for its methodology, on the work of Raymond Williams, it traces the impact of the Great War on the development of language, examining the use of ten ‘keywords’ in the prose of Christopher Isherwood, Evelyn Waugh and Patrick Hamilton, and that of their respective literary milieux, in order to establish how queer lives and modern sub-cultural identities were forged collaboratively within the fictional realm. By utilizing contemporary perspectives on performativity in conjunction with detailed close readings it repositions these authors as self-conscious agents actively producing their own queer masculinities through calculated acts of linguistic transgression.

Charlotte Charteris is a former Leverhulme Early Career Fellow in English and By-Fellow of Churchill College, Cambridge, specializing in literature of the fin-de-siècle, modernist and mid-twentieth-century periods, with a particular interest in queer studies and the aesthetics of transgression.