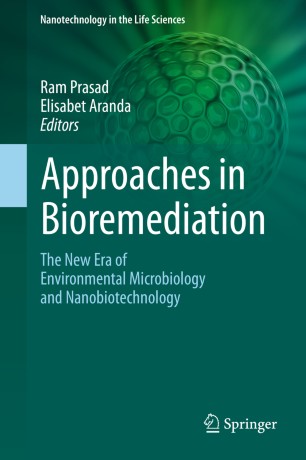 The New Era of Environmental Microbiology and Nanobiotechnology

Part of the Nanotechnology in the Life Sciences book series (NALIS)

Bioremediation refers to the clean‐up of pollution in soil, groundwater, surface water, and air using typically microbiological processes. It uses naturally occurring bacteria and fungi or plants to degrade, transform or detoxify hazardous substances to human health or the environment.

For bioremediation to be effective, microorganisms must enzymatically attack the pollutants and convert them to harmless products. As bioremediation can be effective only where environmental conditions permit microbial growth and action, its application often involves the management of ecological factors to allow microbial growth and degradation to continue at a faster rate. Like other technologies, bioremediation has its limitations. Some contaminants, such as chlorinated organic or high aromatic hydrocarbons, are resistant to microbial attack. They are degraded either gradually or not at all, hence, it is not easy to envisage the rates of clean-up for bioremediation implementation.

Bioremediation represents a field of great expansion due to the important development of new technologies. Among them, several decades on metagenomics expansion has led to the detection of autochthonous microbiota that plays a key role during transformation. Transcriptomic guides us to know the expression of key genes and proteomics allow the characterization of proteins that conduct specific reactions.  In this book we show specific technologies applied in bioremediation of main interest for research in the field, with special attention on fungi, which have been poorly studied microorganisms. Finally, new approaches in the field, such as CRISPR-CAS9, are also discussed. Lastly, it introduces management strategies, such as bioremediation application for managing affected environment and bioremediation approaches. Examples of successful bioremediation applications are illustrated in radionuclide entrapment and retardation, soil stabilization and remediation of polycyclic aromatic hydrocarbons, phenols, plastics or fluorinated compounds. Other emerging bioremediation methods include electro bioremediation, microbe-availed phytoremediation, genetic recombinant technologies in enhancing plants in accumulation of inorganic metals, and metalloids as well as degradation of organic pollutants, protein-metabolic engineering to increase bioremediation efficiency, including nanotechnology applications are also discussed.

Ram Prasad, Ph.D. is associate with Amity Institute of Microbial Technology, Amity University, Uttar Pradesh, India since 2005. His research interest includes plant-microbe-interactions, sustainable agriculture and microbial nanobiotechnology. Dr. Prasad has more than hundred publications to his credit, including research papers, review articles & book chapters and five patents issued or pending, and edited or authored several books. Dr. Prasad has twelve years of teaching experience and he has been awarded the Young Scientist Award (2007) & Prof. J.S. Datta Munshi Gold Medal (2009) by the International Society for Ecological Communications; FSAB fellowship (2010) by the Society for Applied Biotechnology; the American Cancer Society UICC International Fellowship for Beginning Investigators, USA (2014); Outstanding Scientist Award (2015) in the field of Microbiology by Venus International Foundation; BRICPL Science Investigator Award (ICAABT-2017) and Research Excellence Award (2018). He has been serving as editorial board members: Frontiers in Microbiology, Frontiers in Nutrition, Academia Journal of Biotechnology including Series editor of Nanotechnology in the Life Sciences, Springer Nature, USA. Previously, Dr. Prasad served as Visiting Assistant Professor, Whiting School of Engineering, Department of Mechanical Engineering at Johns Hopkins University, USA and presently, working as Research Associate Professor at School of Environmental Sciences and Engineering, Sun Yat-Sen University, Guangzhou, China.
Elisabet Aranda, PhD is Ramon y Cajal Researcher at the Microbiology Department of the University of Granada (UGR), and member of the Institute of Water Research (UGR). She has more than sixteen years of research experience. She has several pre and post-doctoral research stays (Estación Experimental del Zaidín, Spanish National Research Council (CSIC), Spain; University of Naples Federico II, Italy; Institute of Mass Spectrometry, Proteomic and Molecular Biology, Italy; IHIZ Zittau-Technical University of Dresde, Germany; Lawrence Berkeley National Laboratory of the University of California, USA, among others). Her main research expertise is in the field of fungal bioremediation, fungal degradation mechanisms of priority micropollutants and emerging contaminants, in water and soil systems, and the application of molecular tools such as NGS (Illumina) and proteomic approaches in this field. She has published more than fifty publications in this topic (including research papers, review articles and book chapters). She is the inventor of two patents. She is associate Editor in Frontiers in Microbiology, and member of Board of Directors of the specialized group “Biodeterioration, Biodegradation and Bioremediation” of the Spanish Society of Microbiology (SEM). Among the prizes with which it has been awarded, stands out the “Innova Sustainable” award from the Aquae foundation.