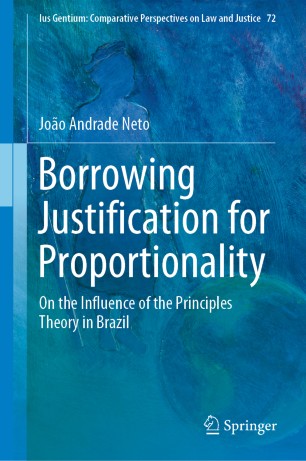 On the Influence of the Principles Theory in Brazil

The proportionality test, as proposed in Robert Alexy’s principles theory, is becoming commonplace in comparative constitutional studies. And yet, the question “are courts justified in borrowing proportionality?” has not been expressly put in many countries where judicial borrowings are a reality. This book sheds light on this question and examines the circumstances under which courts are authorized to borrow from alien legal sources to rule on constitutional cases.

Taking the Supreme Federal Court of Brazil – and its enthusiastic recourse to proportionality when interpreting the Federal Constitution – as a case study, the book investigates the normative reasons that could justify the court’s attitude and offers a comprehensive overview of its case law on controversial constitutional matters like abortion, same-sex union, racial quotas, and the right to public healthcare.

Providing a valuable resource for those interested in comparative constitutional law and legal theory, or curious about Brazilian constitutional law, this book questions the alleged universality of the proportionality test, challenges the premises of Alexy’s principles theory, and discloses more than 68 Brazilian Supreme Court decisions delivered from 2003 to 2018 that would otherwise have remained unknown to an English-speaking audience.