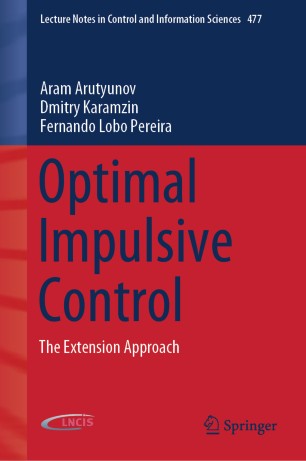 Optimal Impulsive Control explores the class of impulsive dynamic optimization problems—problems that stem from the fact that many conventional optimal control problems do not have a solution in the classical setting—which is highly relevant with regard to engineering applications. The absence of a classical solution naturally invokes the so-called extension, or relaxation, of a problem, and leads to the notion of generalized solution which encompasses the notions of generalized control and trajectory; in this book several extensions of optimal control problems are considered within the framework of optimal impulsive control theory. In this framework, the feasible arcs are permitted to have jumps, while the conventional absolutely continuous trajectories may fail to exist.
The authors draw together various types of their own results, centered on the necessary conditions of optimality in the form of Pontryagin’s maximum principle and the existence theorems, which shape a substantial body of optimal impulsive control theory. At the same time, they present optimal impulsive control theory in a unified framework, introducing the different paradigmatic problems in increasing order of complexity. The rationale underlying the book involves addressing extensions increasing in complexity from the simplest case provided by linear control systems and ending with the most general case of a totally nonlinear differential control system with state constraints.
The mathematical models presented in Optimal Impulsive Control being encountered in various engineering applications, this book will be of interest to both academic researchers and practising engineers.

Aram Vladimirovich Arutyunov is Full Professor at Moscow State University and RUDN University. He is an expert in Nonlinear Analysis, extremum problems theory and optimal control theory. He developed first and second order necessary and sufficient optimality conditions for abnormal optimization problems. He obtained a nondegenerate maximum principle for optimal control problems with state constraints. He also developed coincidence points theory in metric spaces. He is the author of 5 monographs and textbooks as well as more than 150 scientific articles.
Dmitry Yurjevich Karamzin is Leading Researcher at the Federal Research Center “Computer Science and Control” of the Russian Academy of Sciences, Moscow, Russia. He received both his Ph.D. and D.Sc. degrees in Control Theory from Moscow State University. His scientific interests are in the fields of Nonlinear Analysis, Optimization and Optimal Control. He is the author of approximately 50 research articles. Dmitry Karamzin is also an associate member of the research team at the SYSTEC Research Unit, DEEC/FEUP (University of Porto).
Fernando Lobo Pereira is Full Professor at the Electrical Computer Engineering Department of Porto University, Scientific Coordinator of the SYSTEC Research Unit, and Director of the Institute for System and Robotics Porto. He received his Ph.D. degree in Control Theory from Imperial College of Science and Technology from London University, and the Habilitation Title in Automation and Control from Porto University. His research work falls in the following areas: Control Theory (Non-smooth Analysis, Dynamic Optimization, Impulsive Control), Hybrid Systems, and Coordinated Control, and their application in cyber physical frameworks for networks of robotic vehicles and for advanced manufacturing systems. He is the author of more than 50 research articles in topics pertinent to the book. He has been involved in a large number of European and national research problems and has been both an expert adviser to EU regarding the follow up of funded research projects and an evaluator of EU R&D and national (FCT) research and grant proposals.

“This book is certainly an excellent example of how to write a book in control theory, by carefully discussing the main issues, by presenting motivating examples, by adding nice exercises, and by avoiding generality per se.” (Giovanni Colombo, Mathematical Reviews, November, 2019)
Buy options