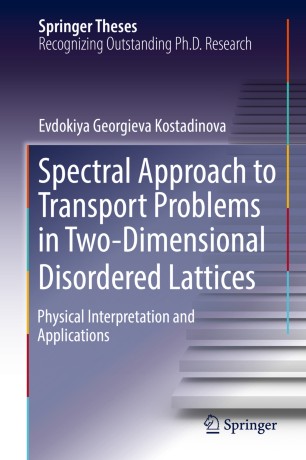 This thesis introduces the spectral approach to transport problems in infinite disordered systems characterized by Anderson-type Hamiltonians. The spectral approach determines (with probability one) the existence of extended states for nonzero disorder in infinite lattices of any dimension and geometry. Here, the author focuses on the critical 2D case, where previous numerical and experimental results have shown disagreement with theory. Not being based on scaling theory, the proposed method avoids issues related to boundary conditions and provides an alternative approach to transport problems where interaction with various types of disorder is considered. Beginning with a general overview of Anderson-type transport problems and their relevance to physical systems, it goes on to discuss in more detail the most relevant theoretical, numerical, and experimental developments in this field of research. The mathematical formulation of the innovative spectral approach is introduced together with a physical interpretation and discussion of its applicability to physical systems, followed by a numerical study of delocalization in the 2D disordered honeycomb, triangular, and square lattices. Transport in the 2D honeycomb lattice with substitutional disorder is investigated employing a spectral analysis of the quantum percolation problem. Next, the applicability of the method is extended to the classical regime, with an examination of diffusion of lattice waves in 2D disordered complex plasma crystals, along with discussion of proposed future developments in the study of complex transport problems using spectral theory.

Evdokiya Georgieva Kostadinova is a research assistant professor in the Center for Astrophysics, Space Physics & Engineering Research at Baylor University. She received her PhD from Baylor University in 2017.