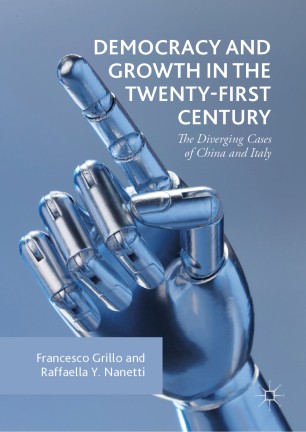 Democracy and Growth in the Twenty-first Century

The Diverging Cases of China and Italy

Is democracy still the best political regime for countries to adapt to economic and technological pressures and increase their level of prosperity? While the West seems to have stagnated in an environment of political mistrust, increasing inequality and low growth, the rise of the East has shown that it may not be liberal democracy that is best at accommodating the social mutations that technologies have triggered.
The cases of China and Italy form the research focus as two extremes in growth performance. China is the star of globalisation in the East, while Italy is the laggard of globalisation in the West and a laboratory of creeping political meltdown now shared by other major Western economies. But is this forever?
Introducing the ‘innovation paradox’ as the main challenge to the West and the notion of ‘knowledge democracy’ as key to sustainable growth, this book presents a new side to the debate on the Fourth Industrial Revolution (or fifth as the authors argue). It is a vital reading for all those questioning what kind of democracy positively impacts innovation as the force whose speed and direction transforms societies and economies.
Francesco Grillo is advisor to Italy's Minister for Education, Universities and Research on national innovation policies and is affiliated with the Scuola Superiore Sant'Anna, Pisa, Italy. He is columnist at Corriere della Sera, holds an MBA from Boston University, USA a PhD from the London School of Economics and Political Science and has been a visiting scholar at Oxford University, UK. He is Managing Director of Vision & Value (consulting firm), and advises the European Commission on innovation and smart specialization.
Raffaella Y. Nanetti is Professor Emerita of Urban Planning and Policy in the College of Urban Planning and Public Affairs, University of Illinois at Chicago, USA, and part of the core team of the Economic and Social Cohesion Laboratory in London, UK. She is an Associate of Italy's National Research Council (CNR) in Rome. Her main research areas are policy and programme evaluation, research design and methodology, and territorial development policies.