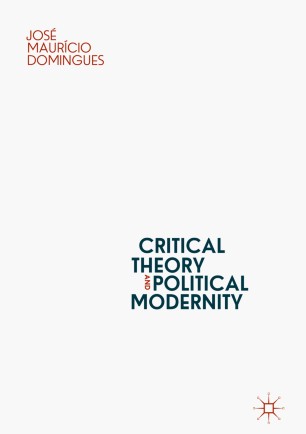 “This book represents a significant and original contribution to the field. It displays an enormous depth of knowledge in its distinctive account of political modernity—its problems and potentials. It is one of the more stereoscopic works recently produced in the broad field of critical theory.”
—Craig Browne, Senior Lecturer in Sociology, The University of Sydney, Australia

This work of political sociology draws together philosophy, jurisprudence, political science, and international relations to study the main categories of political modernity and its development trends. Grounded in critical theory—from Marx to later currents such as the Frankfurt School—Critical Theory and Political Modernity circulates around state power and oligarchy as well as emancipatory possibilities from their foundations to the present, such as radical democracy. Domingues analyzes the main categories of political modernity, including the juridical dimension, to conceptually articulate its long-term processes of development. In so doing, he examines rights, law and citizenship, state and domination abstract and concrete, the political system, state power, freedom and autonomy, scalar configurations, political regimes, oligarchy and democracy.

José Maurício Domingues is Professor of Sociology in the Institute of Social and Political Studies at Rio de Janiero State University, Brazil. He is the recipient of the Anneliese Maier Research Award from the Alexander von Humboldt Foundation, Germany, for 2018-2023 and is the author of, among other texts, Emancipation and History: The Return of Social Theory (2018), Global Modernity,  Development, and Contemporary Civilization: Towards a Renewal of Critical Theory (2012), and Latin American and Contemporary Modernity: A Sociological Interpretation (2008).