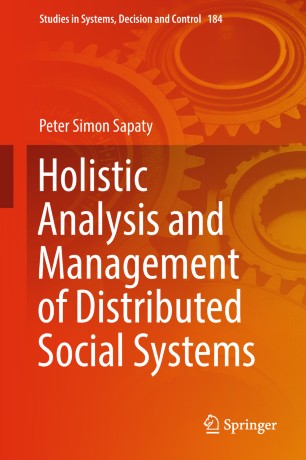 Part of the Studies in Systems, Decision and Control book series (SSDC, volume 184)

This book describes the application of a high-level technology to solve problems in distributed systems that have networked structures with millions to billions of nodes. The main difference from other works is that the approach is based on holistically and simultaneously analysing these systems using a spatial pattern-matching mode, which produces solutions hundreds of times faster than usual. The latest version of the technology is described, together with implementation details and basic Spatial Grasp Language. In addition, the book highlights numerous solutions, covering graph and network problems, their use in large social, industrial, and business ecosystems, social robotics and driverless transport, and the possibility of extrapolating from known gestalt laws on distributed systems, which could potentially be applied in civil and defence contexts. The book is intended for system scientists, business and industry managers, economists, application programmers, security and defence personnel, as well as university students.

Dr Peter Simon Sapaty, Chief Research Scientist, Ukrainian Academy of Sciences, has been working with networked systems for five decades. Outside of Ukraine, he has worked in the Czech Republic, Germany, the UK, Canada, and Japan as a group leader, Alexander von Humboldt researcher, and visiting professor. He launched and chaired the SIG on Mobile Cooperative Technologies in Distributed Interactive Simulation project in the US, and invented a distributed control technology that resulted in a European patent and books with Wiley and Springer. He has published more than 200 papers on distributed systems, and has been included in the Marquis Who’s Who in the World and Cambridge Outstanding Intellectuals of the 21st Century. Peter also works with several international scientific journals, including as editor-in-chief.