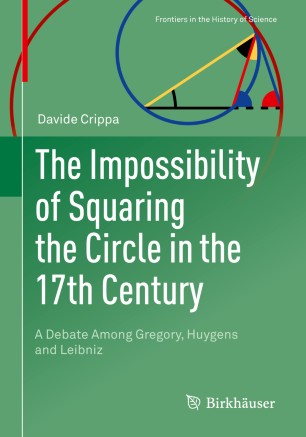 The Impossibility of Squaring the Circle in the 17th Century

A Debate Among Gregory, Huygens and Leibniz

This book is about James Gregory’s attempt to prove that the quadrature of the circle, the ellipse and the hyperbola cannot be found algebraically. Additonally, the subsequent debates that ensued between Gregory, Christiaan Huygens and G.W. Leibniz are presented and analyzed. These debates eventually culminated with the impossibility result that Leibniz appended to his unpublished treatise De quadratura arithmetica.

The author shows how the controversy around the possibility of solving the quadrature of the circle by certain means (algebraic curves) pointed to metamathematical issues, particularly to the completeness of algebra with respect to geometry. In other words, the question underlying the debate on the solvability of the circle-squaring problem may be thus phrased: can finite polynomial equations describe any geometrical quantity? As the study reveals, this question was central in the early days of calculus, when transcendental quantities and operations entered the stage.

“This is an important contribution to the literature that will be of interest to anyone who studies the development of mathematical methods and concepts. ... this is a valuable guide to a fascinating part of 17th-century mathematics.” (Douglas Jesseph, Centaurus, December 3, 2020)
“This book, we are told, is an “abridged and improved” version of the author’s doctoral dissertation, and, in fact, it does read something like a doctoral dissertation: very scholarly and thorough, replete with copious and often lengthy footnotes … . people with a serious interest in the history of science or mathematics will want a copy of this book on their shelves. Any good university library will as well.” (Mark Hunacek, MAA Reviews, June 03, 2019)
Buy options