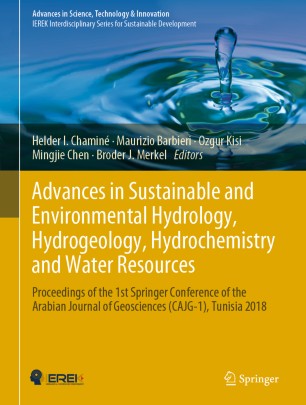 CAJG: Conference of the Arabian Journal of Geosciences

Proceedings of the 1st Springer Conference of the Arabian Journal of Geosciences (CAJG-1), Tunisia 2018

This book comprises the selected papers from the 1st Springer Conference of the Arabian Journal of Geosciences (CAJG-1), Tunisia 2018. The volume is of interest to all researchers and practitioners in the fields of Hydrology, Hydrogeology, Hydrochemistry, Water Resources and Hydrologic Engineering.

Water is a dynamic, finite, and vulnerable but resilient natural resource to be protected in an environmentally sustainable manner. Water systems in different frameworks requires a comprehensive understanding of climatology, geology, hydrogeology, hydrochemistry, hydrodynamics, and surface hydrology. In addition, it is highlighted the role of the variability and climate change in water systems. Furthermore, water has a vital significance to the entire socio-economic sector.

Dr. Merkel studied Chemistry and Geology at the Technical University of Munich (Germany). He received his Ph.D. degree there in 1983 and his Habilitation in 1992 at the University of Kiel (Germany). From 1993 to 2015 he was a full Professor of Hydrogeology and Hydrochemistry at the Technical University of Freiberg (Germany). From 1995 to 2014 he was a director of the Institute of Geology, during five years as a Dean of the Faculty of Geosciences, Geoengineering and Mining, and from 2014 to 2015 he was appointed as a Vice President for Research. Since October 2015, Dr. Merkel is the Vice President for Strategy Development at the Technical University of Freiberg. Dr. Merkel initiated in 1995 the International Conference on Uranium Mining and Hydrogeology (UMH), which was held for seven times in Freiberg. He was speaker of the DFG Research Training Group and has been dealing with arid Hydrogeology, impact of mining on the water, the speciation of elements and numerical modeling of groundwater flow, and chemical reactions and the reactive transport. He was co-founder of the course Geoecology in Freiberg in 2008. In 2002 he founded with others the Scientific Diving Center at the Technical University of Freiberg and established two modules for various studies. He has co-published more than 125 research articles in international indexed and refereed journals. In 2015 Dr. Merkel joined the AJGS as an Associate Editor responsible for evaluating submissions in the fields of Hydrogeology & Mining Geology.

Presently, he is Head of the Laboratory of Cartography and Applied Geology (LABCARGA|ISEP), Senior Researcher at Centre GeoBioTec|UA and Centre IDL|U.Lisbon, as well as belongs to the executive board of the MSc/BSc Geotechnical and Geoenvironmental Engineering (OE+EUR-ACE Label) and the Department of Geotechnical Engineering (ISEP). Currently, he is a board member of the Portuguese Geotechnical Society (SPG) and was a board member of the APGeom – Portuguese Association of Geomorphologists (2009–2013). He was consultant and or responsible over 65 projects of rock engineering, applied geology, hydrogeomechanics, slope geotechnics, mining geology, exploration hydrogeology, hard-rock hydrogeology, water resources, urban groundwater and applied mapping (Mozambique, Portugal, and Spain).

He has been co-authored over 195 publications in indexed journals, conference proceedings/full papers, book chapters, technical and professional papers. He co-edited 5 conference volumes, 3 special volumes, 1 special issue for journal "Environmental Earth Sciences" (2015, Springer), as well as is presently evolved in editing themed issues for journals "Sustainable Water Resources Management" (IAH+Springer) and "Geotechnical Research" (ICE). He has a wide activity as a referee for several international journals. He served as invited Expert Evaluator of Bologna Geoscience programme for DGES (Portugal) and Scientific Projects Evaluation for NCST (Kazakhstan), as well as Coordinator of "Geology on Summer/Ciência Viva" programme at ISEP for geosciences dissemination. He has been also active with teaching and supervising of many PhD, MSc and undergraduate students.

He has been on the editorial board, among others, of Arabian Journal of Geosciences (SSG+Springer), Hydrogeology Journal (IAH+Springer), Geotechnical Research (UK), Current World Environment (India), Earth Science India (India), Revista Geotecnia (Portugal), and Geología Aplicada a la Ingeniería y al Ambiente (Argentina). Currently, is in organizing committee of the International Conferences “Geoethics and Groundwater Management” (IAH/IAPG, Porto, October 2019) and “Natural Hazards – Hydrological Risks” (LREC, Pico Island, Azores, May 2019).
Dr. Barbieri holds a degree in Geological Sciences (1994) and a Ph.D. degree in Earth Sciences (1998) from Sapienza University of Rome (Italy). He is currently Associate Professor of Environmental Geochemistry and Hydrogeochemistry at Sapienza University of Rome (Italy). His current research focusses the application of the geochemistry methodologies in the characterization of environmental problems. In particular he studied the distribution of elements and isotopes in the Earth systems with emphasis on the use abundances and isotopic ratios in defining the interaction between different reservoirs (mantle, crust, atmosphere ad hydrosphere). He has also related interests in environmental geochemistry and Health studying the role of toxic trace elements (e.g. As, B and Hg), deriving from hydrogeochemical anomalies of natural origin, and on water quality. He is an Environmental Advisor (Hydrogeochemistry) for the International Project (2016-2019) SECOSUD II – Conservation and equitable use of biological diversity in the SADC region. The project is financed by the Italian Agency for Development Cooperation and implemented through Eduardo Mondlane University, SouthAfrican National Park and Sapienza University of Rome. He was a Scientific Coordinator (2014–2016) for the Geochemical model of the Vico Lake (Central Italy), with particular regard to environmental arsenic (Client: Regional Agency for Environmental Protection of Lazio), and a Scientific coordinator for the Water Unit of the International Project (2012–2014): Institutional Support to the management of Protected Areas in Albania funding from the International Union for Conservation of Nature (IUCN). In 2017 Dr. Barbieri joined the AJGS as an Associate Editor responsible for evaluating submissions in the fields of Environmental Geochemistry and Hydrogeochemistry/Water Quality.
Dr. Chen holds a B.E. in Environmental Engineering (1997) from Tsinghua University (China), a M.Sc. in Environmental Sciences (2000) from Peking University (China) and a Ph.D. degree in Hydrogeology (2005) from University of California, Santa Barbara (USA). After over 10 years of research experiences in USA, Dr. Chen joined as a senior hydrogeologist the Water Research Center, Sultan Qaboos University (Oman) in 2014. His research focuses on using mathematical models, numerical techniques, and high performance computing to study fluid flow and contaminant transport in heterogeneous subsurface media. He has conducted more than 20 research projects on underground environment remediation, hydrocarbon reservoirs, CO2 utilization and sequestration, geothermal reservoir, groundwater modeling and management. He holds an adjunct hydrogeologist position at Lawrence Livermore National Laboratory in USA, working on CO2 sequestration projects. Dr. Chen serves as an Associate Editor for Springer Hydrogeology Journal (official journal of International Association of Hydrogeologists). He has co-published more than 25 research articles in international indexed and refereed journals. In 2014 Dr. Chen jointed AJGS as an Associate Editor responsible for evaluating submissions in the fields of Hydrogeology, Hydrology, Contaminant Hydrology, Numerical Modeling, Uncertainty Quantification and Risk Assessment.
Dr. Kisi received his B.Sc. in Civil Engineering from the Cukurova University, Turkey (1997), his M.Sc. in Hydraulics from the Erciyes University, Turkey (1999), and his Ph.D. degree from Istanbul Technical University, Turkey (2003). His research fields are: Developing novel algorithms and methods towards the innovative solution of hydrologic forecasting and modeling; suspended sediment modeling; forecasting and estimating hydrological variables such as precipitation, streamflow, evaporation, evapotranspiration, groundwater, lake level; hydroinformatics; and trend analysis. He is an active participant in numerous national research projects and supervisor of several MSc and PhD works. He is serving as an Editorial Board Member of several reputed journals (e.g. Journal of Hydrologic Engineering (ASCE), ISH Journal of Hydraulic Engineering, Irrigation & Drainage Systems Engineering and Austin Journal of Irrigation). He has also served as a Guest Editor for Special Issues published in Hydrological Hazards in a Changing Environment-Early Warning, Forecasting, and Impact Assessment I and II (Advances in Meteorology) in 2015. He is also serving as a Reviewer for more than 70 journals indexed in Science Citation Index (SCI) in the fields of hydrology, irrigation, water resources and hydro-informatics (e.g. ASCE Journal of Hydrologic Engineering, ASCE Journal of Irrigation and Drainage Engineering, Water Resources Research, Journal of Hydrology, Hydrological Processes, Hydrology Research, Water Resources Management, Hydrological Sciences Journal, Journal of Hydroinformatics, Water Science and Technology). He has authored more than 200 research articles and 24 discussions (Web of Science h-index = 35, Google Scholar h-index = 46; Scopus h-index 39). Dr. Kisi is the recipient of the 2006 International Tison Award (given by the International Association of Hydrological Sciences (IAHS); URL: http://iahs.info/About-IAHS/Competition--Events/Tison-Award/Tison-Award-winners/OKisi.do). In 2017 Dr. Kisi joined the AJGS as an Associate Editor responsible for evaluating submissions in the fields of hydroinformatics; hydrological modeling/evapotranspiration estimation; river flow forecasting techniques; and other fields related to hydrology.