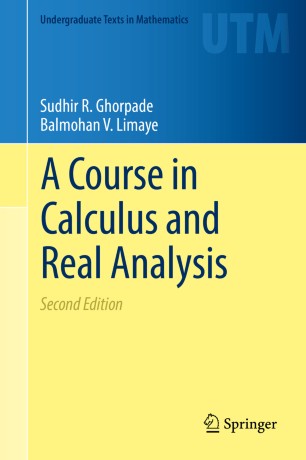 A Course in Calculus and Real Analysis

Offering a unified exposition of calculus and classical real analysis, this textbook presents a meticulous introduction to single‐variable calculus. Throughout, the exposition makes a distinction between the intrinsic geometric definition of a notion and its analytic characterization, establishing firm foundations for topics often encountered earlier without proof. Each chapter contains numerous examples and a large selection of exercises, as well as a “Notes and Comments” section, which highlights distinctive features of the exposition and provides additional references to relevant literature.

This second edition contains substantial revisions and additions, including several simplified proofs, new sections, and new and revised figures and exercises. A new chapter discusses sequences and series of real‐valued functions of a real variable, and their continuous counterpart: improper integrals depending on a parameter. Two new appendices cover a construction of the real numbers using Cauchy sequences, and a self‐contained proof of the Fundamental Theorem of Algebra.

In addition to the usual prerequisites for a first course in single‐variable calculus, the reader should possess some mathematical maturity and an ability to understand and appreciate proofs. This textbook can be used for a rigorous undergraduate course in calculus, or as a supplement to a later course in real analysis. The authors’ A Course in Multivariable Calculus is an ideal companion volume, offering a natural extension of the approach developed here to the multivariable setting.

From reviews:
[The first edition is] a rigorous, well-presented and original introduction to the core of undergraduate mathematics — first-year calculus. It develops this subject carefully from a foundation of high-school algebra, with interesting improvements and insights rarely found in other books. […] This book is a tour de force, and a necessary addition to the library of anyone involved in teaching calculus, or studying it seriously.  N.J. Wildberger, Aust. Math. Soc. Gaz.

Sudhir R. Ghorpade is Institute Chair Professor in the Department of Mathematics at the Indian Institute of Technology (IIT) Bombay. He has received several awards, including the All India Council for Technical Education (AICTE) Career Award for Young Teachers and the Prof. S.C. Bhattacharya Award for Excellence in Pure Sciences. His research interests lie in algebraic geometry, combinatorics, coding theory, and commutative algebra.

Balmohan V. Limaye is Professor Emeritus in the Department of Mathematics at the Indian Institute of Technology (IIT) Bombay. He is the author of several research monographs and textbooks, including Linear Functional Analysis for Scientists and Engineers (Springer, 2016). He worked at IIT Bombay for more than 40 years and has twice received the Award for Excellence in Teaching from IIT Bombay. His research interests include Banach algebras, approximation theory, numerical functional analysis, and linear algebra.

The authors’ companion volume A Course in Multivariable Calculus and Analysis (2010) is also in the UTM series.

“This book would be a valuable asset to a university library and that many instructors would do well to have a copy of this book in their personal libraries. In addition, I believe that some students would benefit if they possessed a copy of this book to use for reference purposes.” (Jonathan Lewin, MAA Reviews, April 15, 2019)