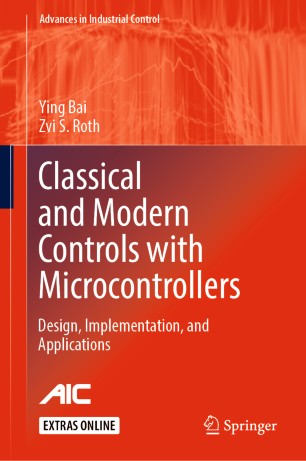 Classical and Modern Controls with Microcontrollers

The author provides a detailed description of the practical considerations and applications in linear and nonlinear control systems. They concentrate on the ARM® Cortex®-M4 MCU system built by Texas Instruments™ called TM4C123GXL, in which two ARM® Cortex®-M4 MCUs, TM4C123GH6PM, are utilized. In order to help the reader develop and build application control software for a specified microcontroller unit.

Readers can quickly develop and build their applications by using sample project codes provided in the book to access specified peripherals. The book enables readers to transfer from one interfacing protocol to another, even if they only have basic and fundamental understanding and basic knowledge of one interfacing function.

Classical and Modern Controls with Microcontrollers is a powerful source of information for control and systems engineers looking to expand their programming knowledge of C, and of applications of embedded systems with microcontrollers. The book is a textbook for college students majored in CE, EE and ISE to learn and study classical and modern control technologies. The book can also be adopted as a reference book for professional programmers working in modern control fields or related to intelligent controls and embedded computing and applications.

Dr. Roth served as Chair of the EE Department from 1993 to 1997, and from 2005 to 2008 as Director of the State of Florida funded Florida-Israel Institute. Additional research interests that Dr. Roth has developed over the years include Automation Design for Biotechnology, Submicron Analog Electronic Circuits Design and Modeling of Biological and Physiological Systems. He published over 50 refereed papers in journals and conferences and graduated 9 PhDs.