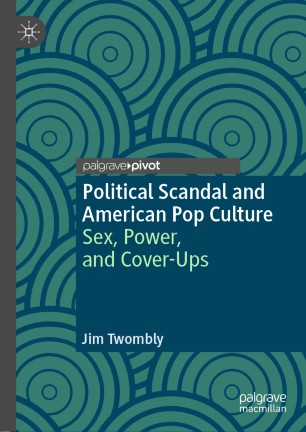 This book provides a newer definition of political scandal and applies it in a way to remove “ordinary corruption” from the discussion.  It then defines pop culture and examines how scandal and pop culture interact. The discussion addresses the question: when does a scandal actually enter into our pop culture. The mechanisms or vehicles by which this occurs include editorial cartoons, Broadway shows, music, movies, television, and more. The first chapter lays out the two main definitions and gives a bit of historical background to the discussion that follows. Chapters 2 through 8 deal with scandals from Watergate to the Trump Administration and from presidents to members of Congress and governors. Chapter 9 ties all of the previous discussion together and makes an assessment of the contemporary state of scandal and pop culture.

This book works well as a supplement in a course on American Government, in American Studies, and is aimed at a wide range of readers from college freshmen to more advanced scholars and political junkies.

Jim Twombly is Professor of American Politics at Elmira College, USA. He is the author of The Progression of the American Presidency: Individuals, Empire, and Change (Palgrave Macmillan 2013), as well as a number of journal articles, book reviews, and conference papers.  Dr. Twombly is also a political analyst on WENY-TV in Elmira.