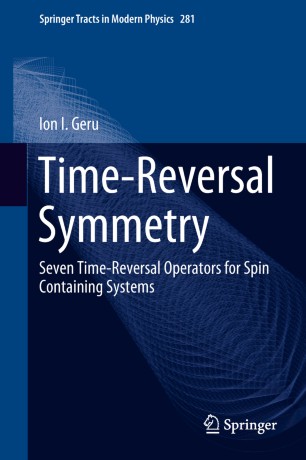 It shows that the traditional black-white point groups of magnetic symmetry are not applicable to magnetic systems with Kramers degeneration of energy levels and that magnetic groups of four-color symmetry are adequate for them. Further, it addresses the predicted structural distortions in Kramers three-homonuclear magnetic clusters due to time-reversal symmetry that have been identified experimentally.

Lastly, it proposes a method of synthesis of two-nuclear coordination compounds with predictable magnetic properties, based on the application of the time-reversal transformation that was confirmed experimentally.

In the years 2004–2007, Prof. Geru was a part-time visiting professor at the Florida State University. Since 2000, he is a Corresponding Member of the Academy of Sciences of Moldova. In 1998-2017, he was member of the AMPERE Committee. Since 1984, he is the Vice-President of the Moldovan Physical Society. He has more than 330 publications and 4 books, including I. Geru, D. Suter, Resonance Effects of Excitons and Electrons: Basics and Applications, Springer-Verlag, 2013.

“The present book is a wonderful explanation of this subject. The book begins with basic facts but mostly is devoted to the modern theory. It is to mention that experimental confirmation are also discussed in details.” (Dmitry Artamonov, zbMath 1412.81005, 2019)
Buy options