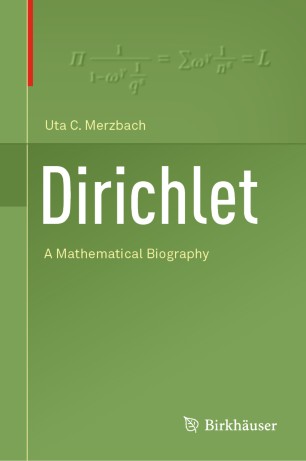 This is the ﬁrst extensive biography of the inﬂuential German mathematician, Peter Gustav Lejeune Dirichlet (1805 – 1859). Dirichlet made major contributions to number theory in addition to clarifying concepts such as the representation of functions as series, the theory of convergence, and potential theory. His mathematical methodology was explicitly based on a thorough knowledge of the work of his predecessors and his belief in the underlying unity of the branches of mathematics. This uniﬁed approach is exempliﬁed in a paper that effectively launched the ﬁeld of analytic number theory. The same orientation pervaded his teaching, which had a profound inﬂuence on the work of many mathematicians of subsequent generations.

Chapters dealing with his mathematical work alternate with biographical chapters that place Dirichlet’s life and those of some of his notable associates in the context of the political, social, and artistic culture of the period. This book will appeal not only to mathematicians but also to historians of mathematics and sciences, and readers interested in the cultural and intellectual history of the nineteenth century.