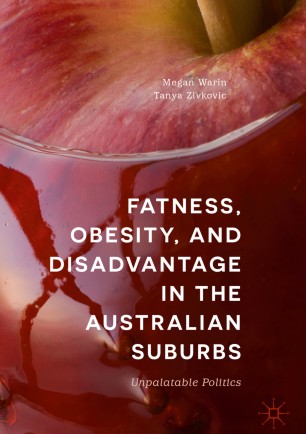 Fatness, Obesity, and Disadvantage in the Australian Suburbs

“This volume demands that we reckon with how obesity and its representational lives have become intensely politicized. Warin and Zivkovic skillfully balance nuance and broad relevance to shed light on the often-harmful effects of anti-obesity interventions. Their deeply reflexive examination of the social effects of good-intentions holds important lessons for policy makers and ethnographers alike. This is a sophisticated book that changes how the problem of obesity is figured while creatively reworking what counts as a solution.”
—Emily Yates-Doerr, Assistant Professor of Anthropology, Oregon State University, USA, and University of Amsterdam, the Netherlands

“This is a detailed and insightful ethnographic account of how fatness and obesity are constructed as problems among people living in circumstance of disadvantage in suburban Australia. The authors show how and why a well-meaning programme promoting healthy eating in France was lost in translation in Australia. A must-read for absolutely anyone with an interest in poverty, fatness and health in high income countries.”
—Stanley Ulijaszek, Professor of Social and Cultural Anthropology, University of Oxford, UK

This ethnography takes the reader into the Australian suburbs to learn about food, eating and bodies during the highly political context of one of Australia’s largest childhood obesity interventions. While there is ample evidence about the number of people who are overweight or obese and an abundance of information about what and how to eat, obesity remains ‘a problem’ in high-income countries such as Australia. Rather than rely on common assumptions that people are making all the wrong choices, this volume reveals the challenges of ‘eating healthy’ when money is scarce and how, different versions of being fat and doing fat happen in everyday worlds of precarity. Without acknowledgement of the multiple realities of fatness and obesity, interventions will continue to have limited reach.

Megan Warin is a social anthropologist and an Australian Research Council (ARC) Future Fellow at the University of Adelaide, Australia.

Tanya Zivkovic is a social anthropologist who holds an Australian Research Council Discovery Early Career Research Award at the University of Adelaide, Australia.

Megan Warin, PhD, is a social anthropologist and an Australian Research Council (ARC) Future Fellow at the University of Adelaide, Australia. She is the author of Abject Relations: Everyday Worlds of Anorexia (2010), published in the series Cambridge Studies in Medical Anthropology.