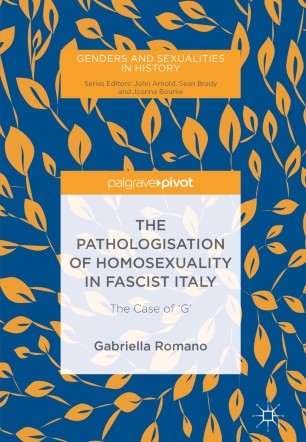 The Pathologisation of Homosexuality in Fascist Italy

This open access book investigates the pathologisation of homosexuality during the fascist regime in Italy through an analysis of the case of G., a man with "homosexual tendencies" interned in the Collegno mental health hospital in 1928. No systematic study exists on the possibility that Fascism used internment in an asylum as a tool of repression for LGBT people, as an alternative to confinement on an island, prison or home arrests. This research offers evidence that in some cases it did.
The book highlights how the dictatorship operated in a low-key, shadowy and undetectable manner, bending pre-existing legislation. Its brutality was - and still is - difficult to prove. It also emphasises the ways in which existing stereotypes on homosexuality were reinforced by the regime propaganda in support of its so-called moralising campaign and how families, the police and the medical professionals joined forces in implementing this form of repression.