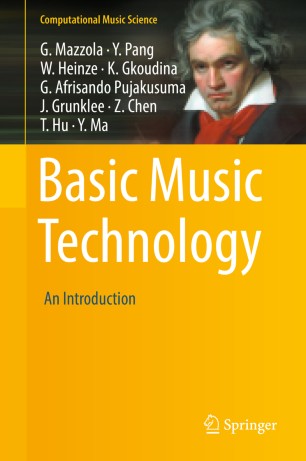 This is an introduction to basic music technology, including acoustics for sound production and analysis, Fourier, frequency modulation, wavelets, and physical modeling and a classification of musical instruments and sound spaces for tuning and counterpoint. The acoustical theory is applied to its implementation in analogue and digital technology, including a detailed discussion of Fast Fourier Transform and MP3 compression. Beyond acoustics, the book discusses important symbolic sound event representation and software as typically realized by MIDI and denotator formalisms. The concluding chapters deal with globalization of music on the Internet, referring to iTunes, Spotify and similar environments.

The book will be valuable for students of music, music informatics, and sound engineering.

Prof. Dr. Guerino Mazzola earned his Ph.D. in Mathematics from Zurich University. He wrote the groundbreaking book The Topos of Music in 2002, its formal language and models are used by leading researchers in Europe, India, Japan, and North America and have become a foundation of music software design. Prof. Mazzola has an appointment as professor in the School of Music at the College of Liberal Arts, University of Minnesota. Yan Pang, William Heinze, Kyriaki Gkoudina, Gian Afrisando Pujakusuma, Jacob Grunklee, Zilu Chen, Tianxue Hu, and Yiqing Ma are students in the School of Music of the University of Minnesota.