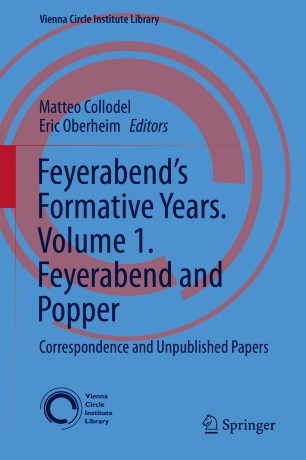 This book offers an inside look into the notoriously tumultuous, professional relationship of two great minds: Karl Popper and Paul Feyerabend. It collects their complete surviving correspondence (1948-1967) and contains previously unpublished papers by both. An introduction situates the correspondence in its historical context by recounting how they first came to meet and an extensive editorial apparatus provides a wealth of background information along with systematic mini-biographies of persons named.

Taken together, the collection presents Popper and Feyerabend’s controversial ideas against the background of the postwar academic environment. It exposes key aspects of an evolving student-mentor relationship that eventually ended amidst increasing accusations of plagiarism. Throughout, readers will find in-depth discussions on a wide range of intriguing topics, including an ongoing debate over the foundations of quantum theory and Popper’s repeated attempts to design an experiment that would test different interpretations of quantum mechanics. The captivating exchange between Feyerabend and Popper offers a valuable resource that will appeal to scientists, laymen, and a wide range of scholars: especially philosophers, historians of science and philosophy and, more generally, intellectual historians.

Paul Feyerabend (1924-1994) studied science and philosophy before earning his Ph.D. in philosophy of science in Vienna in 1951. He made a name for himself as a vocal proponent of Popper’s critical rationalism, before becoming one of its most ardent critics. With his international best-seller Against Method (1975), he became one of the twentieth century’s most famous philosophers of science.

Karl Popper (1902-1994) is widely regarded as one of the twentieth century's greatest and most influential philosophers of science. He argued against inductivist accounts of scientific method traditionally used to distinguish science from non-science, developing what has become a popular alternative: falsificationism, according to which we propose and nature disposes. He was also a social and political philosopher of considerable stature, emphasizing the constructive role of criticism as the driving force of progress in both science and in society.

Matteo Collodel is an independent scholar and a tenured high school teacher in philosophy, history and the social sciences. He earned his MA and his PhD in philosophy from the “Ca’ Foscari” University of Venice (Italy), with the philosophy of science as his main area of specialization and historically-oriented dissertations on the philosophy of Mary Hesse (2001) and on Paul Feyerabend’s idea of incommensurability (2007). He was a postdoctoral research fellow at the Humboldt University of Berlin (2008-2012), where he was engaged in a project on Feyerabend's unpublished correspondence and papers. He is currently working on an intellectual biography of Feyerabend.