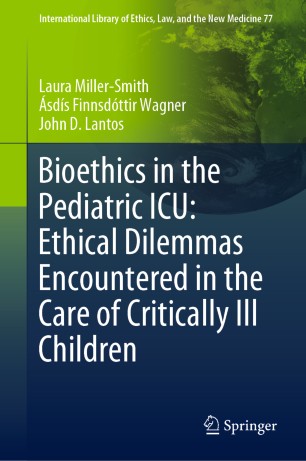 Bioethics in the Pediatric ICU: Ethical Dilemmas Encountered in the Care of Critically Ill Children

Part of the International Library of Ethics, Law, and the New Medicine book series (LIME, volume 77)

This book examines the many ethical issues that are encountered in the Pediatric Intensive Care Unit (PICU). It supports pediatricians, nurses, residents, and other providers in their daily management of critically ill children with the dilemmas that arise. It begins by examining the evolution of pediatric critical care, and who is now impacted by this advancing medical technology. Subsequent chapters explore specific ethical concerns and controversies that are commonly encountered. These topics include how to conduct end-of-life discussions with families facing a myriad of challenging choices. It goes on to explore the concept of futility, and what that does and does not mean in the pediatric ICU setting.  Controversial subjects such as children as organ donors, particularly using donation after cardiac death, in addition to issues surrounding the declaration of brain death are covered. Additional chapters address resource allocation, and also analyze the use of long-term technology in chronically critically ill children.  Chapters include case examples with guidance on how to work through similar difficulties and decision-making.  While this book is specifically targeted for care providers at the ICU bedside, it is also of benefit to medical students, students in bioethics, practicing ethical consultants and families who are dealing with critically ill children.

Laura Miller-Smith, MD, is a pediatric intensivist at Children’s Mercy Hospital in Kansas City, Missouri, and is a an Associate Professor of Pediatrics at University of Missouri in Kansas City.  She completed the Pediatric Bioethics Certificate Program at Children’s Mercy Center for Bioethics, and currently serves as Chairperson of the Hospital Ethics Committee.  She additionally serves on the Society of Critical Care Medicine’s Ethics Committee.  Specific interests include organ donation, issues surrounding the determination of death, and technology dependence in critically ill children.

Ásdís Finnsdóttir Wagner, DO, is a pediatric intensivist at Children’s Mercy in Kansas City. She is a graduate of the Pediatric Bioethics Certificate Program at Children’s Mercy Center for Bioethics and has conducted research on end-of-life issues and communication within the pediatric intensive care unit. She is an active member of the Ethics Committee at Children’s Mercy. She is currently Assistant Professor of Pediatrics at University of Missouri in Kansas City and serves as Educational Liaison for resident and medical student education within the critical care department.

He has published hundreds of peer-reviewed articles and many books, including The Lazarus Case, Neonatal Bioethics, and Do We Still Need Doctors?

He is currently Director of a Pediatric Bioethics Center and Children’s Mercy Hospital and Professor of Pediatrics at University of Missouri in Kansas City.

“This book is specifically intended for care providers … also benefit ethics consultants or students looking for a concise book on the ethical issues in pediatric critical care. … This would be a welcome resource for providers or other scholars engaged in the care of critically ill children. It offers a concise and well-researched treatment of ethical issues that arise in the pediatric ICU and provides practical guidance for those working in the field.” (Annie B. Friedrich, Doody's Book Reviews, 27 September, 2019)
Buy options