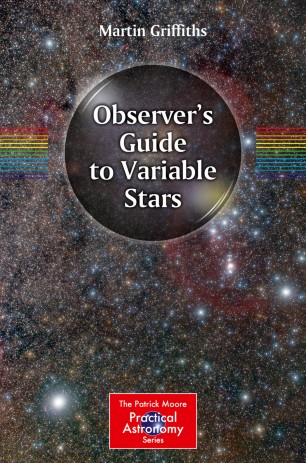 This book contains everything you need to know about variable stars -- stars whose brightness varies noticeably over time. The study of variable stars has been a particularly popular area of research for amateurs for many years; the material contained herein serves as both an introduction to amateur astronomers and a useful reference source for seasoned variable star observers.

With its thorough, non-mathematical descriptions of variable stars and tips for how to see them, this book enables novices and experts alike to set off into the field and observe a wide range of delightful sights. It strikes a balance between easily visible objects that can be seen in any telescope or binoculars, and variable stars that are a direct challenge to those with large aperture equipment or access to photometric tools and methods.

After helping the observer differentiate between variable star types, the author goes on to explain the skills needed to operate a telescope and other equipment, as well as how to couple filters to a CCD camera or digital SLR camera in order to photometrically record these celestial objects. Further, the book includes an observational guide to 50 objects for study, with finder charts and data about light curves for ease of identification, along with the stars’ celestial coordinates, magnitudes, and other pertinent information.

Martin Griffiths is a writer and professional astronomer. He is a recipient of the Astrobiology Society of Britain’s Public Outreach Award (2008) and the Astronomical League’s Outreach Master Award (2010). He also holds the League’s Master Observer certificate and has written or contributed to over 100 published science journal articles. He has written several books for Springer.
Griffiths was one of the founder members of NASA’s Astrobiology Institute Science Communication Group, which was active from 2003 to 2006. He also managed a multi-million-pound European program in Astrobiology for adult learners across Wales from 2003 to 2008. Since then, he has been involved in promoting adult education across Wales. After spending 17 years as a lecturer at the University of South Wales, he is now Director of the Brecon Beacons Observatory, a Dark Sky Ambassador for the Brecon Beacons National Park, a committee member of the International Dark Sky Reserve Steering Groups of Snowdonia and Brecon Beacons National Parks, and a science presenter and consultant for Dark Sky Wales.
Griffiths also works as a consultant to the Welsh Government through his involvement with the Dark Sky Discovery initiative, enabling public access to dark sky sites in association with Dark Sky Wales, Dark Sky Scotland and Natural England. He has spent many years directing stargazing events at the park and in the last three years has provided training for the BBNPA dark sky ambassadors.
Griffiths is a Fellow of the Royal Astronomical Society; A Fellow of the Higher Education Academy; a member of the Astrobiology Society of Britain; the European Society for the History of Science: the British Astronomical Association; the British Science Association; the Webb Deep-Sky Society; the Society for Popular Astronomy; and the Astronomical League.