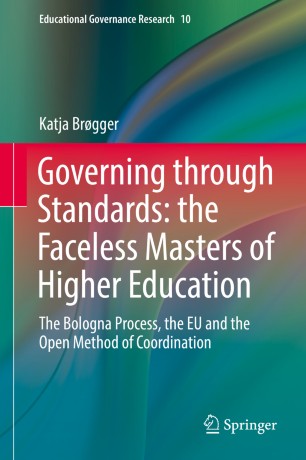 Governing through Standards: the Faceless Masters of Higher Education

The Bologna Process, the EU and the Open Method of Coordination

This book offers an empirical and theoretical account of the mode of governance that characterizes the Bologna Process. In addition, it shows how the reform materializes and is translated in everyday working life among professors and managers in higher education. It examines the so-called Open Method of Coordination as a powerful actor that uses “soft governance” to advance transnational standards in higher education. The book shows how these standards no longer serve as tools for what were once human organizational, national or international, regulators. Instead, the standards have become regulators themselves – the faceless masters of higher education. By exploring this, the book reveals the close connections between the Bologna Process and the EU regarding regulative and monitoring techniques such as standardizations and comparisons, which are carried out through the Open Method of Coordination. It suggests that the Bologna Process works as a subtle means to circumvent the EU’s subsidiarity principle, making it possible to accomplish a European governance of higher education despite the fact that education falls outside EU’s legislative reach. The book’s research interest in translation processes, agency and power relations among policy actors positions it in studies on policy transfer, policy borrowing and globalization. However, different from conventional approaches, this study draws on additional interpretive frameworks such as new materialism.