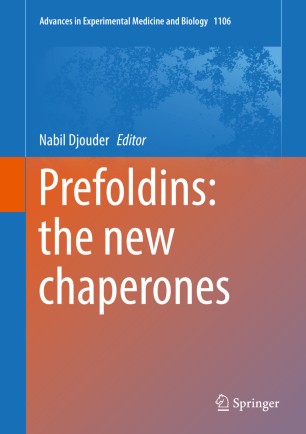 Part of the Advances in Experimental Medicine and Biology book series (AEMB, volume 1106)

This book reviews recent work on molecular chaperones of the prefoldin family from their discovery in Archaea to the basic clarification of their structure. Even though, there is still a lot to investigate in order to understand the roles and functions of prefoldins, some preliminary work suggests their contribution in assembly and activation of a variety of macromolecular complexes. Hence, the reader is introduced to recent structural findings via cryo-electron microscopy and to the importance of this particular group of proteins in health and disease.
This book also discusses the particular structure of the URI prefoldin-like complex. In addition, recent developments in the generation of URI mouse models speculate on the functions and emerging roles of the URI prefoldin-like complex in various cellular processes. This novel protein complex represents a unique cellular machinery, which molecular basis of its activity still remains to be determined.

This work is thus a guide to help researchers in the field to have a more comprehensive and critical view of the prefoldin world.

Nabil Djouder obtained his PhD in Molecular Pharmacology from the University of Strasbourg (France) and the University of Freiburg (Germany). In 2001 he moved to Basel (Switzerland) as a postdoctoral research fellow and joined the laboratory of W. Krek at the Novartis Friedrich Miescher Institute. In 2003 he became a member of the Competence Centre for Systems Physiology and Metabolic Diseases (CCSPMD) and in September 2009 he joined the CNIO as a Principal Investigator establishing his group in the field of Growth factors, Metabolism and Cancer.