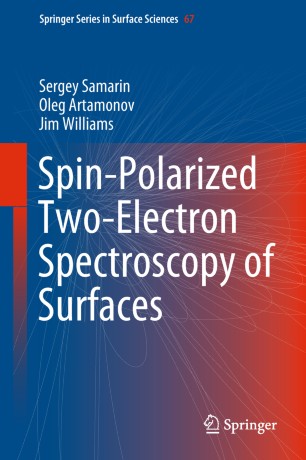 This book presents developments of techniques for detection and analysis of two electrons resulting from the interaction of a single incident electron with a solid surface.  Spin dependence in scattering of spin-polarized electrons from magnetic and non-magnetic surfaces is governed by exchange and spin-orbit effects. The effects of spin and angular electron momentum are shown through symmetry of experimental geometries: (i) normal and off normal electron incidence on a crystal surface, (ii) spin polarization directions within mirror planes of the surface, and (iii) rotation and interchange of detectors with respect to the surface normal.  Symmetry considerations establish relationships between the spin asymmetry of two-electron distributions and the spin asymmetry of Spectral Density Function of the sample, hence providing information on the spin-dependent sample electronic structure. Detailed energy and angular distributions of electron pairs carry information on the electron-electron interaction and electron correlation inside the solid. The “exchange – correlation hole” associated with Coulomb and exchange electron correlation in solids can be visualized using spin-polarized two-electron spectroscopy. Also spin entanglement of electron pairs can be probed. A description of correlated electron pairs generation from surfaces using other types of incident particles, such as photons, ions, positrons is also presented.

Sergey Samarin graduated from Leningrad State University in 1972 and completed his PhD studies of “radiative interaction of low-energy electrons with metals” in 1976. Then, as Research Fellow, Senior Research Fellow at the Institute of Physics, Leningrad State University (now St. Petersburg State University), he pursued further aspects of electron interactions with surfaces. From 1981-1984, as Associate Professor at the University of Conakry, Guinea, his accomplishments included fluency in French. After returning to St. Petersburg State University he continued his work on low-energy inverse photoemission from solid surfaces, total current spectroscopy, and plasmon excitation in thin Ag films by electron impact with their subsequent decay via photon emission. This work resulted in his Doctor of Science degree in 1995.

From 1991-1992 and 1995-2000 Sergey Samarin enjoyed research as an invited Research Fellow in the group of Professor Kirschner in the Max Planck Institute for Microstructure Physics, Halle, Germany. The development there of low-energy spin-polarized two-electron spectroscopy of solid surfaces in reflection geometry, and its achievements, opened new avenues.

In 2000 he moved to the University of Western Australia, as Research Fellow, Senior Research Fellow, and Research Professor combining his research with undergraduate and graduate teaching. His work was focused mainly on the interaction of spin-polarized low-energy electrons and positrons with solid surfaces for which new instruments were constructed in the Australian Research Council Centre of Excellence for Antimatter and Matter Studies at UWA.  Spin-dependent electron scattering dynamics and spin-related electronic properties of magnetic and nonmagnetic surfaces were studied using spin-polarized low-energy single- and two- electron spectroscopies.

The development of quantum metrology included new technology combining quantum phenomena and a low energy beam of positrons with electrostatic focusing into a UHV surface analysis system.  Recent studies include angular distributions of reemitted positrons from W(100) with over layers of oxygen and LiF as well as reflection and diffraction of low-energy positrons from W(001).  He is now Senior Honorary Research Fellow at the Department of Physics of UWA.

His pioneering results on electron-photon emission spectroscopy of metals, obtained during 1971-72 at Southampton University, England, as a Research Fellow, were reported at a session of the Royal Physical Society, London. The method of investigation of unoccupied electron states became known as inverse photoemission spectroscopy.

Ultra-high-vacuum spherical deflector spectrometer was constructed for secondary electron spectroscopy and for electron energy loss spectroscopy under low-energy electron excitation. Pioneering results showed the dominant role of the long range order of the atomic structure of the surface in the formation of the electron excited states. It was also shown that the energy spectrum of secondary electrons was determined by the surface electron structure, especially the unoccupied electron density of states.

Early in the 1980s he suggested coincidence electron spectroscopy as a new method of investigation of the surface electron structure. In collaboration with Prof. J. Kirschner (MPI, Germany) measurements showed for the first time the existence of correlated scattered electrons from a W(100) surface

In 1989 at the Freie Univetsitat Berlin with Prof. G. Kaindl the studies of inverse photoemission flourished. His research during 1992-1993 continued with an invitation of the Deutscher Academischer Austauschdienst  on the theme “Role of optical properties of solids in inverse photoemission and bremsstrahlung in plasma resonance region of the medium”. During 1993-1997 further study of electron coincidence spectroscopy continued in the Max-Planck-Institut für Mikrostrukturphysik, Halle, Germany, in Prof. J. Kirschner’s group and subsequently with Prof. G. Stefani, Universitet Roma Tre. After 2002 his collaboration with J. Williams and S. Samarin at the University of Western Australia, led to advances in the field of spin-dependent electron scattering dynamics and coincidence electron spectroscopy of solids.

Oleg Mikhailovich Artamonov, Professor at St. Petersburg State University, is a member of the St. Petersburg Physical Society, of Committees of the Institute of Physics.

At Queens University, Belfast, from 1970, many first accurate studies of electron scattering from atomic hydrogen and inert gas atoms provided much data which underpinned the development of quantum scattering approximations and established an academic career with  progression to Reader in 1976. At UWA Perth since 1980 as Professor, and Chair of Physics (1980- 1990), then Winthrop Professor and with the contributions of outstanding colleagues, his career pursued an understanding of quantum phenomena from observations of the structure and dynamics of atoms, molecules, surfaces and thin films.

From 1983 polarized electrons and low energy ion and electron spin spectroscopies explored time reversal and geometric asymmetries with two and three particle coincidence detection of photons and electrons. The identification of angular momenta phenomena included spin-orbit and exchange interactions, plasmon effects, and structural and dynamic phase effects in atoms using electron spin and photon polarizations. The outcomes lead, for example, to improved understanding of the mechanism of excitation and ionization processes in atoms. From 2001 he has collaborated with Sergey Samarin on polarised electron and positron studies of surfaces and advancing widespread interests within the Australian Research Council Centre for Antimatter and Matter Studies at UWA.

He earned a DSc from ANU (1982) and UWA (2002). In 1989 was awarded the Boas Medal from the Australian Institute of Physics and in 1998 was elected a Fellow of the Australian Academy of Science. Service at UWA included Dean, Faculty of Science, UWA (1992), Head of Division of Agriculture and Science, UWA (1993).  Retirement to Emeritus Professor 2015 and Senior Honorary Research Fellow opened the way for continuing research in quantum aspects of atomic structure and scattering from gaseous and solid materials.