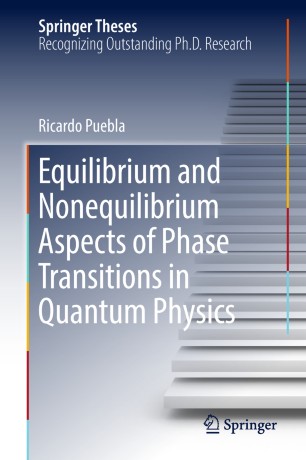 Equilibrium and Nonequilibrium Aspects of Phase Transitions in Quantum Physics

In this book, the equilibrium and nonequilibrium properties of continuous phase transitions are studied in various systems, with a special emphasis on understanding how well-established universal traits at equilibrium may be extended into the dynamic realm, going beyond the paradigmatic Kibble–Zurek mechanism of defect formation. This book reports on the existence of a quantum phase transition in a system comprising just a single spin and a bosonic mode (the quantum Rabi model). Though critical phenomena are inherent to many-body physics, the author demonstrates that this small and ostensibly simple system allows us to explore the rich phenomenology of phase transitions, both in- and out-of-equilibrium. Moreover, the universal traits of this quantum phase transition may be realized in a single trapped-ion experiment, thus avoiding the need to scale up the number of constituents. In this system, the phase transition takes place in a suitable limit of system parameters rather than in the conventional thermodynamic limit – a novel notion that the author and his collaborators have dubbed the finite-component system phase transition. As such, the results gathered in this book will open promising new avenues in our understanding and exploration of quantum critical phenomena.

Ricardo Puebla studied Physics at the Universidad Complutense de Madrid and for one year at the Technical University of Munich. After completing his MSc in Nuclear Physics he joined the group led by Prof. Martin B. Plenio at the University of Ulm, where he gained his PhD. He is currently a post-doctoral researcher at Queen’s University Belfast in the group of Prof. Mauro Paternostro.