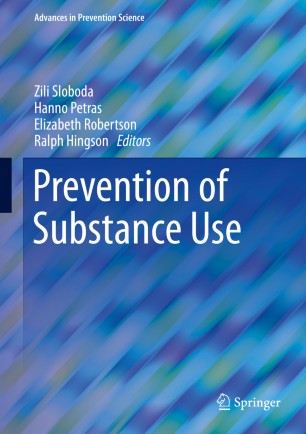 Prevention of Substance Use

This volume provides a serious examination of substance use prevention research and practice as components of the continuum from health promotion through to prevention and health care in sub-groups and in the general population. Extensive background chapters provide portals into the evolution of the field and the cutting edge research being conducted on the etiology, epidemiology, and genetics of substance use and abuse. The global nature and health burden of substance use and abuse incorporates assessments of the serious problems related to the prevention of legal substance use (i.e., alcohol and tobacco) and how lessons learned in those arenas may apply to the prevention of illicit substance use.  Research and practice chapters detail a range of effective evidence-based programs, policies and practices and emerging prevention interventions from the literatures on the family and school contexts in addition to innovations involving mindfulness and the social media. Continued advancements in substance use prevention research, practice, training, and policy are projected.

Included among topics addressed are:

The array of research accomplishments and real-world methods presented in Prevention of Substance Use merits the attention of a variety of researchers and practitioners, including public health professionals, health psychologists, and epidemiologists.

Zili Sloboda, Sc.D., President, Applied Prevention Science, Inc. was trained in medical sociology at New York University and in mental health and epidemiology at the Johns Hopkins University Bloomberg School of Public Health.  The majority of her research has been related to the delivery of health-related services to youth and adults and epidemiology. She was a founder of the Society for Prevention Research (SPR) in both the United States and Europe and is well-published in the area of drug abuse epidemiology and substance use prevention.  Her major books include the Handbook of Drug Abuse Prevention, the Epidemiology of Drug Abuse, and, Defining Prevention Science.  She has a long standing commitment to the dissemination of evidence-based programming and the advancement of Translation I and II research through work with SPR and with the United Nations Office on Drugs and Crime to develop international standards for substance use prevention based on research evidence.  Her current work is focused on the international dissemination of the Universal Prevention Curriculum developed to build the capacity of prevention professionals worldwide to implement evidence-based prevention interventions and policies in their communities.

Hanno Petras, Ph.D., is a Principal Researcher at AIR where he is responsible for developing and leading rigorous research proposals in the areas of youth violence, sexual violence perpetration, substance abuse, suicide as well as to evaluate the effectiveness of research- and practice-based prevention intervention programs in school and community settings. He has over 20 years of experience designing and conducting research and evaluation of preventive interventions aimed at minimizing unhealthy and risky outcomes over the life course. His work has documented the continued vulnerability of individuals over the life course and how preventive interventions can alleviate such vulnerabilities.  He has published extensively on prevention interventions related to aggressive/disruptive behavior in the classroom, mental health, tobacco use, violence against women, and HIV risk factors related to substance use. He recently co-edited together with Dr. Zili Sloboda the first book in the series entitled Advances in Prevention Science that focuses on defining prevention science, which was published by Springer Publications.

Elizabeth Robertson, Ph.D. recently retired as Professor and Associate Dean for Research in the College of Human Environmental Sciences at the University of Alabama.  Prior to joining the University faculty she was at the National Institutes of Health where she served as Chief of the Prevention Research Branch at the National Institute on Drug Abuse.  Dr. Robertson has expertise in the prevention of drug use initiation and progression including a developmental focus from early childhood through adulthood and contextual foci including the family, school, the criminal justice and social welfare systems, clinical and recreational settings, and the media.  In addition, she has expertise in the prevention of drug-related HIV infection and the dissemination and implementation of evidence-based practices.  Her published journal articles, book chapters, and government publications focus on: dissemination and implementation of evidence-base prevention interventions, inhibitory control, the effects of parental incarceration on children, the contributions of social support and economic stress to family/child dysfunction, and principles of prevention intervention. She has received awards from the Society for Prevention Research, the Secretary of the Department of Health and Human Services and the National Institutes for Health.

Ralph Hingson, Sc.D., is the Director of the Division of Epidemiology and Prevention Research at the National Institute on Alcohol Abuse and Alcoholism (NIAAA).  Before joining NIAAA, he was Professor and Associate Dean for Research at the Boston University School of Public Health.  He has authored or co-authored 170 research articles and book chapters on the epidemiology of alcohol-related morbidity and mortality and on the impact of environmental interventions on the these consequences of alcohol use.  He has received numerous awards and recognitions for his work from such groups as Robert Wood Johnson Foundation, the International Council on Alcohol, Drugs, and Traffic Safety (ICADTS), the American Society of Addiction Medicine, and the University of Pittsburgh. In 2017, Dr. Hingson received the 2017 National Institutes of Health Director’s Award for his role as a member of the Surgeon General's Report Team for the recently-released Surgeon General’s Report on Alcohol, Drugs, and Health. He is a Past President of ICADTS and currently serves on the World Health Organization coordinating council to implement WHO’s global strategic plan to reduce the harmful use of alcohol.