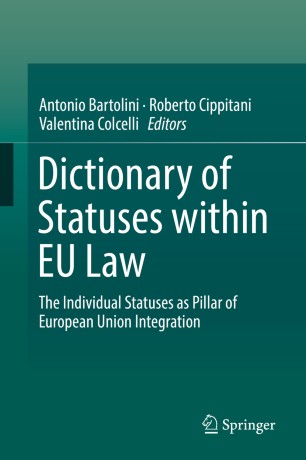 Dictionary of Statuses within EU Law

The Individual Statuses as Pillar of European Union Integration

This Dictionary analyses the ways in which the statuses of European citizens are profoundly affected by EU law. The study of one’s particular status (as a worker, consumer, family member, citizen, etc.) helps to reconsider the legal notions concerning an individual’s status at the EU level. The Dictionary includes a foreword by Evgeni Tanchev, Advocate General at the Court of Justice of the European Union, which illustrates some interesting features of the Court’s case law on statuses.
The Dictionary’s core is composed of 79 chapters, published in alphabetical order. Each brief chapter analyses how the individual status was conditioned or created by contemporary EU law, or how the process of European integration modified the traditional juridical definition of the respective status.
The Dictionary provides answers to the following questions: Has the process of European integration modified the traditional juridical definition of individual status? Has the concept of legal status now acquired a new function? What role has EU law played in developing a new modern function for the concept of individual status? Are the selection of a specific individual status by EU law and the proliferation of such statuses, which is synonymous with the creation of new privileges, collectively undermining the goal of achieving substantive equality between EU citizens? Does this constitute a return to the past? Under EU law, is it possible to create a uniform definition of the legal status of the person, over and above the definition that is provided by a given Member State’s legal system?

​Antonio Bartolini is the Academic Coordinator of Jean Monnet project “EuroStatus”. He’s Lawyer on Administrative law, with experience in the field of environmental law, public procurements law, cultural goods, urban law, public employment law, public services. Since September 2010 he is full professor of Administrative Law in the Faculty of law of Perugia’s University, with the didactic responsibility of administrative law course (M-Z), Magistral Degree in Jurisprudence (currently in expectation). Since June 2015, he is Councillor for the Umbria Region (five years role), with the responsibility of reforms. He is also member of the directive board of Aidu (Italian association of Urbanistic Law).
Valentina Colcelli, Ph.D., is Researcher of National Research Council (Italy) - Ifac-Sesto Fiorentino (FI) -;  Module Leader of Jean Monnet European Modules “Europeanization Through Private Law Instruments” (EuPlaw), University of Perugia and Member of Managing Board Jean Monnet Centre of Excellence “Research and Science” (R&S), University of Perugia. She is also Expert for European Commission Directorate-General for Research And Innovation/Infrastructures _ ERIC.
Roberto Cippitani is Professor of Biolaw and of Research and Innovation Law, at the Università degli Studi di Perugia, Department of Medicine. He is Jean Monnet Chairholder and Academic Coordinator of the Jean Monnet Centre of Excellence “Rights and Science”. R. C. is visiting professor in several Universities in Europe and Latin America.