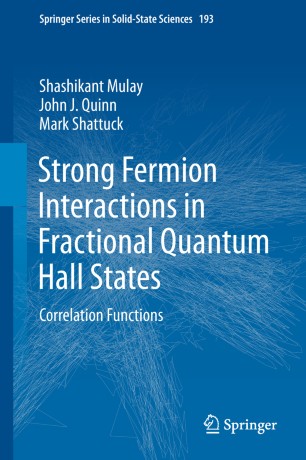 This monograph presents an intuitive theory of trial wave functions for strongly interacting fermions in fractional quantum Hall states. The correlation functions for the proposed fermion interactions follow a novel algebraic approach that harnesses the classical theory of invariants and semi-invariants of binary forms. This approach can be viewed as a fitting and far-reaching generalization of Laughlin’s approach to trial wave functions. Aesthetically viewed, it illustrates an attractive symbiosis between the theory of invariants and the theory of correlations. Early research into numerical diagonalization computations for small numbers of electrons shows strong agreement with the constructed trial wave functions.
The monograph offers researchers and students of condensed matter physics an accessible discussion of this interesting area of research.

John J. Quinn is a well-known theoretical physicist as well as an academic administrator; he is a former Chancellor and a professor emeritus since 2015 at the University of Tennessee, Knoxville, USA. He is an expert in the areas of condensed matter physics and many-body theory including two dimensional Composite fermions, low-dimensional systems, quantum Hall effect and nanoscience. Quinn was also one of the first researchers to recognize that physics of ‘two-dimensional electron systems’ needs to be treated as a professional-sub-specialty. Quinn earned his Ph. D. in Physics in 1958 from the University of Maryland under the supervision of Professor R.A. Ferrell. In 1958, Quinn joined the technical staff at RCA Laboratories. Subsequently, he held visiting positions at the University of Pennsylvania and Purdue University before joining the physics faculty at Brown University in 1965. From 1965 to 1989, Quinn was at Brown University; he held the Ford Foundation Chair in Physics from 1985-1989.
From 1989 to 1992, Quinn was the Chancellor of the University of Tennessee, where he has held the Willis Lincoln Chair of Excellence, Professor of Physics and Professor of Engineering Science and Mechanics, from 1992 to 2015. He is a co-author of Solid State Physics (Springer, 2009) with Kyung-Soo Yi. Quinn is a recipient of many honours, including: Fellow, American Physics Society, 1963; NATO Fellow, 1971-1972; ScD Honoris Causa, Purdue University, 1992; Outstanding Graduate Alumnus Award, Physics Department, University of Maryland, 2005; The Distinguished Alumnus Award, College of Computer, Math and Natural Sciences, University of Maryland, 2012.

Mark A. Shattuck is a Researcher at the Institute for Computational Science, Ton Duc Thang University in Vietnam (2017-present) and an Adjunct Assistant Professor in the Department of Mathematics, University of Tennessee (2013-present). Shattuck earned his Ph.D. in Mathematics in 2005 from the University of Tennessee under the supervision of Professor Carl Wagner. His research interests are primarily in Enumerative and Algebraic Combinatorics. He has been a Visiting Researcher at the University of Haifa (Israel) in 2011-2012 and in 2015.

“This book is particularly useful to researchers who are interested in this diagrammatic approach, and could also be a useful reference for readers with an interest in the FQH effect.” (Hong-Hao Tu, zbMATH 1414.81010, 2019)
Buy options